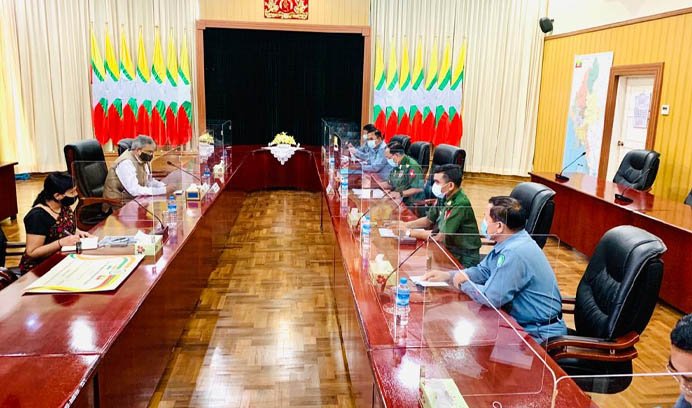 The India-Myanmar relationship is rooted in shared historical, ethnical, and cultural ties

Indian ambassador to Myanmar Saurabh Kumar handed over a cheque for $5 million to Myanmar Minister for Border Affairs Lt-Gen Ye Aung on August 28, for the third year of the India-Myanmar Border Area development, further strengthening the bilateral ties between both sides.

“@AmbSaurabhKumar met H.E. Union Minister for the Office of the State Counsellor, U Kyaw Tint Swe, on 28 August 2020 in Nay Pyi Taw to discuss relevant bilateral issues,” the official page of Embassy of India in Yangon, India in Myanmar had tweeted.

In 2012, a Memorandum of Understanding on India-Myanmar Border Area development was signed during the visit of then Prime Minister Manmohan Singh to Myanmar. According to the MoU, India would grant $5 million per annum for the basic infrastructure and livelihood of the Chin State and Naga Self-Administered Zone.

“Under the third year projects, nine roads/bridges and five schools have been constructed in Chin State. The projects have been undertaken in nine townships with 82 beneficial villages. The beneficiaries include an estimated 28,000 people,” an official statement by the Embassy of India, Yangon said.

The statement further said that 14 roads/bridges and six schools and one healthcare center have been constructed in three township areas covering 80 villages. The project benefitted an estimate of 49,000 villagers.

In the third cycle of India-Myanmar Border Area Development, so far 141 projects of construction of roads/bridges, healthcare centers, schools, in Chin State and Naga Self-Administered Zone have been implemented or are in advance stages of implementation.

India and Myanmar's relationship has been on the positive side and both have signed several agreements to enhance bilateral cooperation over the years.

Earlier in the year, Myanmar President U. Win Myint visited India and both sides discussed a wide range of bilateral, regional, and international issues of common interest. Both sides also reiterated that defense and security cooperation remain one of the key pillars of their bilateral relationships.

After meeting him, Prime Minister Narendra Modi had tweeted, “Held extensive talks with Mr. U Win Myint, the President of Myanmar. Discussed ways to expand bilateral cooperation in various sectors.”

During the visit, 10 agreements were signed with a focus on the socio-economic development of the southeast Asian nation.

An MoU on ‘Cooperation for Prevention of Trafficking in Persons; Rescue, Recovery, Repatriation, and Re-Integration of Victims of Trafficking’ was signed as a part of the agreement. Further, an agreement regarding Indian Grant Assistance for Implementation of Quick Impact Projects (QIP) was also signed between the two sides.

India and Myanmar, which share a long land border of over 1,600 km, have always stood by each other. Both sides signed a Treaty of Friendship in 1951 and since then, efforts have been made to strengthen the ties.