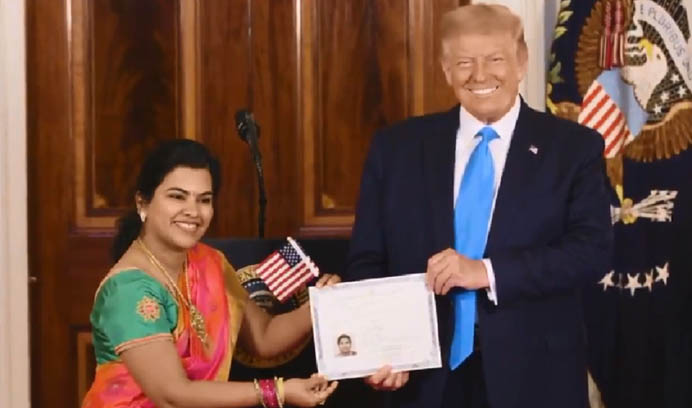 US President Donald Trump used a White House ceremony to emphasize his support for legal immigration by welcoming an Indian software developer to the great American family of citizens. Trump, according to a report in Khaleej Times, said Sundari Narayanan had been in the United States for 13 years and she and her husband have two beautiful children.

Chad Wolf, Acting Homeland Security Secretary, administered the oath of office to Sundari and four others, including a hijab-wearing veterinarian from Sudan; the others were from Lebanon, Bolivia and Ghana.

“You followed the rules, you obeyed the laws, you learned your history, embraced our values and proved yourselves to be men and women of the highest integrity,” the report quoted President Trump. He said that they followed the laws although it was not easy and they went through a lot to get the citizenship, the ‘priceless possession in the world’.

However, the ceremony had been dampened by Trump’s hardline on illegal immigration, building a wall on the southern border to stop migrants and deporting illegal immigrants, especially those with criminal backgrounds. In his 2016 presidential campaign, Trump had underlined illegal immigration as a key issue. As per the report, he has also temporarily stopped the granting of green cards, or immigrant visas, and H1-B professional work visas, most of which goes to India.