Is Pakistan heading towards its economic nemesis? 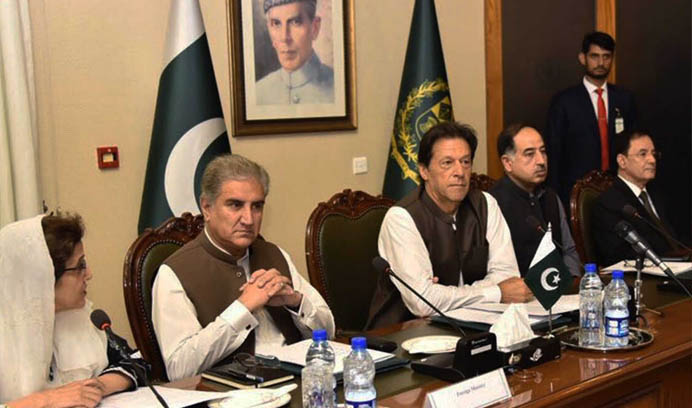 Pushed to the wall by FATF, Pakistan is looking towards China to get out of the anti-terror group’s dragnet

On August 20, Pakistan Foreign Minister Shah Mahmood Qureshi landed in China on a two-day visit. The agenda of the visit, as per Pakistan’s Ministry of Foreign Affairs, was seeking China’s cooperation in fighting the Covid-19 pandemic and raising issues of regional and international importance with Chinese interlocutors. But this was only for public consumption.

The Pakistan Foreign Minister had rushed to China to seek its help in preventing the Paris-based Financial Action Task Force (FATF) from black- listing it.

The forthcoming meet of the FATF is crucial as Pakistan has to come out clean on the terrorist financing and money laundering issue. In June 2018, it was put on the Grey List by the FATF after a warning that by the end of 2019, if it failed to take action in curbing terror financing, it would be put on the Black List along with North Korea and Iran.

The FATF was to hold its plenary meet in the first week of June. However, on account of the Covid-19 pandemic, it was extended and now, FATF has decided to hold a virtual plenary meet next month. Pakistan is nervous, and understandably so.

During its June 2018 meet, FATF had given Pakistan 27 action points to comply with. Over two years have passed, but Pakistan has yet to comply with action points like the conversion of madrassas to schools and health units into official formations, and placing of effective domestic cooperation between the Financial Monitoring Unit and Law Enforcing Agencies in investigation of terror financing.

Pushed to the wall by FATF, Pakistan Parliament recently passed the UN Security Council Amendment Bill 2020, and the Anti-Terrorism Act Amendment Bill, 2020. These bills focus on measures to freeze and seize assets, travel ban and arms embargo on entities and individuals on the sanction list of the UN and impose heavy penalty and long-term jail to those facilitating terror.

It has also banned 88 new terrorists, including 1993-Mumbai serial blast accused and underworld don Dawood Ibrahim. For the first time, Pakistan has accepted that Dawood Ibrahim stays in Karachi.

Despite all this, India is prepared to make Pakistan pay for its crimes. It is peeved at the behavior of Pakistan’s political and military leaders as they are hand in glove with each other in pushing cross-border terrorism. All this is happening even as FATF has placed it in the Grey List and the threat of it being black-listed has not been ruled out.

Once Pakistan is black-listed, it would leave the country high and dry on the economic front. Already suffering from a serious balance of payments crisis with the International Monetary Fund (IMF) also putting a lot of terms and conditions for its $6 billion package, Pakistan will not wish to be deprived of new capital and investment. Saudi Arabia has already indicated that it will not supply oil to Pakistan on deferred payments.

Pakistan and Saudi Arabia had entered into a pact in November 2018 for the supply of $3.2 billion worth of oil on deferred payments. Similarly, the United Arab Emirates (UAE) had also announced a $6.2 billion package for Pakistan in December 2018, including a $3.2 billion oil facility. But it has reduced its financial assistance to $2 billion and also shelved plans to give a $3.2 billion oil facility on deferred payments. In the wake of the Pakistan-Saudi Arabia relationship further deteriorating, there is a lower chance that Islamabad can win any type of favour from the Gulf countries.

Thus, Pakistan is today completely dependent on China to resolve its monetary crisis. But the question is: Will China continue to support Pakistan in the case that it is brought in the Black List? China has already slowed down funding of the ambitious China-Pakistan Economic Corridor (CPEC), while it is itself in the grip of economic recession. The effect of the US trade war has begun to weigh heavily on China, while in the post Covid-19 situation, it is treated with disdain by the international community. In this backdrop, how China will come to Pakistan’s rescue is a major question.

Overall, the Imran Khan government in Pakistan has little to cheer about even if FATF gives it reprieve by continuing to keep it in the Grey List. Except for China, no one will come to help it ease its monetary situation. Rather, some experts say that till Pakistan continues to sponsor terrorism, risk of its international isolation and its consequent economic impact on the country will loom large.