India pavilion opens at Army-2020 Forum being held in Russia 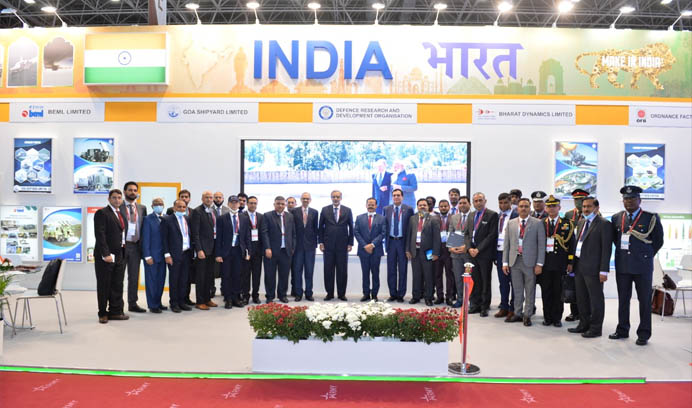 Officials and delegates at the India Pavilion. (Source: Twitter @DefProdnIndia)

The India Pavilion at the Army-2020 International Military and Technical Forum being held in Russia was inaugurated by Secretary of Defence Production Raj Kumar and Indian Ambassador DB Venkatesh Verma outside Moscow.

According to a report by NDTV, the Indian Embassy in Russia tweeted, "Secretary (Defence Production) Raj Kumar and Ambassador inaugurated the India Pavilion at Army-2020 outside Moscow and visited other pavilions showcased at the exhibition, including India-Russia Brahmos JV pavilion."

The prominent event organised by the Russian Defence Ministry began on August 23 and will end on August 29 at the Patriot Park near Moscow, said the NDTV report.

The Indian officials also graced the plenary session of Army-2020.

The publication reported that according to Sputnik, delegations from at least 70 countries have confirmed their presence at the forum.

Delegations of some nations couldn't come due to the coronavirus pandemic. The Embassies of South Africa and Philippines stated that they will send defence attaches at the forum.

Countries like Belarus, Brazil, India, and Kazakhstan will showcase the national expositions at the Patriot Congress and Exhibition Centre.

The Russian Defence Ministry will display a unique exhibition tracing the development of its tanks over the past years. Unprecedentedly, a queue of 23 tanks and armoured vehicles were placed in an open area in Patriot Park, as per the article by NDTV.

Read the complete article in NDTV