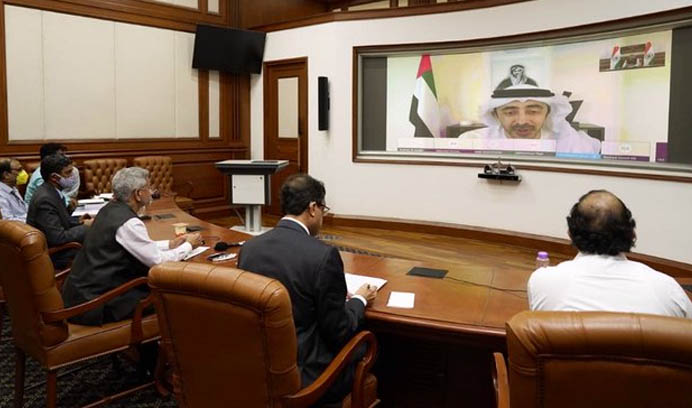 India and the UAE on Monday held a Joint Commission Meeting on Trade, Economic and Technical Cooperation

During the meet, the Indian side led by External Affairs Minister S Jaishankar and the UAE side led by Minister of Foreign Affairs and International Cooperation Sheikh Abdullah Bin Zayed Al Nahyan, held wide –ranging of talks in a “a friendly, frank and constructive atmosphere, reflecting the strong bilateral ties between the two strategic partners,” a press note issued by the Ministry of External Affairs said.

Both sides “expressed satisfaction over the sustenance of momentum in the bilateral relations in various areas for mutual benefit under the aegis of the Comprehensive Strategic Partnership,” the MEA said.

In this context, they welcomed the close cooperation during the last few months in the fight against the COVID-19 pandemic and discussed a joint strategy to offset the economic and social impact of the pandemic on both countries.

Both Ministers noted with satisfaction the progress on institutional mechanisms which continue to guide and promote the multifaceted bilateral cooperation through an extensive framework of agreements.

Both sides also discussed the regional issues pertaining to their neighbourhood and cooperation at the United Nations and other multilateral forum.

India and the UAE expressed optimism over the growing trade, economic and investment cooperation between the two countries.

The Indian side invited further investments from the UAE in key sectors of the Indian economy such as infrastructure including logistics, food parks, highways, ports, airports, renewable energy and defence.

The UAE side conveyed appreciation for the significant contributions made by the Indian expatriate community and expressed its willingness to further strengthen links in energy and food security.

Both sides agreed to hold the next Session of the India-UAE Joint Commission Meeting in Abu Dhabi in 2021. The specific dates of the Meeting will be finalised by both sides through diplomatic channels.

Earlier on August 13, the Indian side led by Secretary, Consular, Passport and Visa and Overseas Indian Affair Sanjay Bhattacharya and the UAE side headed by Assistant Minister of Economic and Trade Affairs, Ministry of Foreign Affairs and International Cooperation Abdul Nasser Al Shaali held senior officials meeting(SOM). It was held in a virtual format.

It should be remembered that in preparation for the JCM and SOM, virtual meetings of the members of the 5 Sub-Committees from India and the UAE on Overview and High-level exchanges; Economic, Trade and Investment cooperation; Consular & Community Affairs cooperation; Defence and security cooperation; and Education, culture and youth cooperation were held on August 10-11