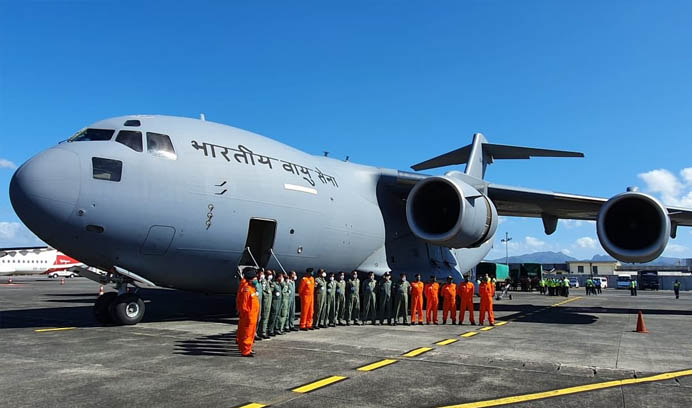 Members of the technical response team arrive from India along with equipment in an Indian Air Force aircraft. (Source: Twitter

India has sent technical equipment and personnel to Mauritius to help it mitigate the environmental crisis due to an oil spill off the country’s south-east coast. Nearly 30 tonnes of specialized equipment and material was sent to Mauritius following a request in a special Indian Air Force aircraft, the Ministry of External Affairs said today.

India’s assistance to the country’s efforts to contain the oil spill and ongoing salvage operations comes close on the heels of providing financial support for combating Covid-19. India had also supplied essential medicines and sent a medical assistance team.

The specialized equipment sent by India includes Ocean Booms, River Booms, Disc Skimmers, Heli Skimmers, Power packs, Blowers, Salvage barge and Oil absorbent Graphene pads and other accessories. These are specifically designed to contain the oil slick, skim oil from water, and assist in clean up and salvage operations, the ministry said in a statement.

A 10-member Technical Response Team which includes personnel from the Indian Coast Guard who are trained in handling oil spill containment operations has also been sent to Mauritius.

“India’s assistance is in line with it’s policy to extend humanitarian assistance and disaster relief to its neighbours in the Indian Ocean region, guided by the Prime Minister’s vision of SAGAR (Security and Growth for All in the Region),” the ministry’s statement said.

The ministry pointed out that the government’s response to the request for urgent assistance “reflects the close bonds of friendship between India and Mauritius and India’s abiding commitment to assist the people of Mauritius in need”.

The past few years have seen India reach out proactively to countries in the Indian Ocean Region with financial assistance and technical support for development projects, particularly in the infrastructure sector, to counter China’s efforts to increase its influence in the region.

This was one of the five projects being implemented under India’s 2016 Special Economic Package for Mauritius.

On August 13, India announced a financial package for Maldives for the island country’s Greater Male Connectivity Project (GMCP). This includes a grant of US$100 million and Line of Credit of worth US$400 million.

India also announced a budgetary support of US$250 million to Maldives, which is facing a crisis due to the Covid-19 situation.

Maldives President Ibrahim Mohamed Solih has described it as a “landmark moment in Maldives-India cooperation”.