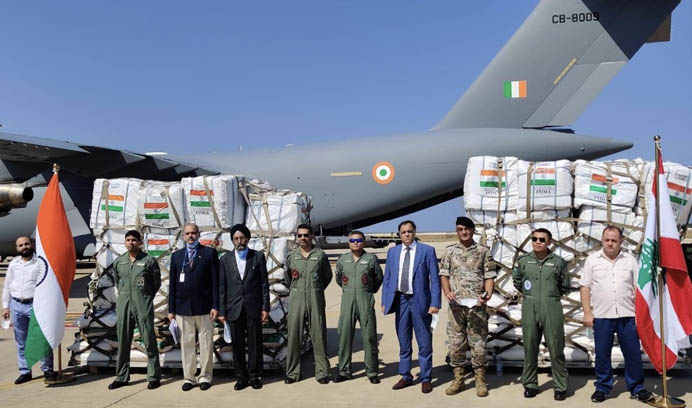 Responding to the massive explosion that rocked Beirut on August 4 which led to killing of more than 150 people and rendering hundreds of people homeless, India has sent relief materials to Lebanon.

As many as 58 metric tonnes of emergency humanitarian aid in a special Indian Air Force’s C17 aircraft were sent to Lebanon, Ministry of External Affairs’ spokesperson Anurag Srivastava said in a weekly briefing on Friday.

All these aids were handed over by Indian ambassador to Beirut Dr Suhel Ajaz Khan to senior officials of Lebanese armed forces.

Speaking about it, the Indian ambassador tweeted, “India is a dependable partner! We supplied relief material this morning for the Lebanese people in the aftermath of the terrible tragedy of Aug 4. I wish to thank MOFA and Lebarmy Official for their coordination.”

Earlier, India had expressed its condolence on the incident at the recent United Nations Office for the Coordination of Humanitarian Affairs UNOCHA meeting on Lebanon.

India and Lebanon share warm diplomatic relations. India has also separately sent PPE kits, surgical gloves and gowns to Lebanon in the light of a spike in the Covid-19 situation.