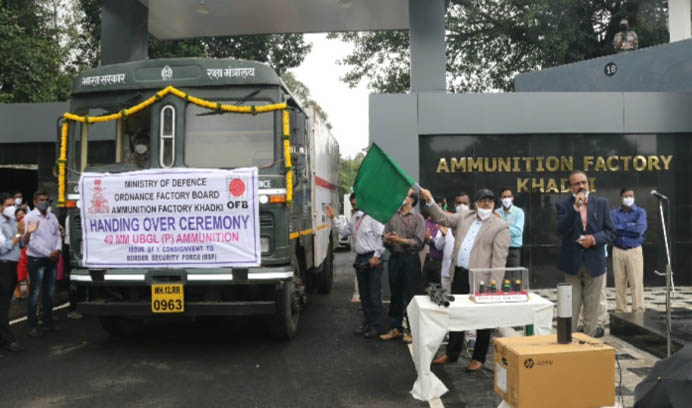 Fired from a launcher fitted under the barrel of 5.56 mm rifles like INSAS, the 40 mm UGBL is light in weight with a 400-metre range.

In a bid to shore up indigenous production of weapons and take forward the ‘Atmanirbhar Bharat’ initiative, Ammunition Factory Khadki, Pune, has sent the first consignment of 40 mm Under Barrel Grenade Launchers (UGBL) to Border Security Forces.

Taking to twitter, PRO Defence Nagpur said, “With this, the Ammunition Factory Khadki, Pune also wrote a new chapter on self-reliance and indigenization of 40 mm UBGL Ammunition production on August 11, 2020, by sending the first consignment to the BSF.”

The 40 mm UGBL is light in weight with a 400-metre range. It can be fired by the same equipment by the soldier and it is also very safe ammunition for carrying by soldiers.

In the wake of the Covid-19-triggered crisis and China’s aggression on the border, India, under the leadership of Prime Minister Narendra Modi has given a clarion call for self-reliance. Aim behind such initiative is development of stronger Research and Development capacity and innovation and also in saving billions of dollars worth of foreign exchange.

The government recently banned the import of 101 defence items, while preparations are on to put restrictions on imports of more defence equipment and replace them with locally produced critical items.

In this context, the Defence Acquisition Council (DAC) in its meeting held under the chairmanship of Defence Minister Rajnath Singh on August 11, accorded approval for capital acquisitions of various platforms and equipment required by the Indian Armed Forces. Proposals for an approximate cost of Rs 8,722.38 crore were approved.

Post Certification 70 Basic Trainer Aircraft will be initially procured from HAL and balance 36 after operationalisation of HTT-40 fleet in IAF.

To improve the fire power of Indian Navy, the DAC approved procurement of an upgraded version of Super Rapid Gun Mount (SRGM) which is fitted as the main gun onboard Navy and Indian Coast Guard (ICG) warships from Bharat Heavy Electricals Limited (BHEL).

The upgraded version of SRGM has enhanced capability to perform against fast manoeuvring targets like missiles and Fast Attack Crafts and increase the maximum engagement range.

In view of the availability of requisite capability for indigenous development of the ammunition, both in terms of ‘Manufacturing’ and ‘Technology’, the DAC has given approval for procurement of 125 mm APFSDS (Armour Piercing Fin Stabilized Discarding Sabot) ammunition for Indian Army as a ‘Design and Development Case’. The ammunition being procured will have a 70 per cent indigenous content.

The DAC has also given approvals for the speedy procurement of AK 203 and Unmanned Aerial Vehicle upgrades.