Indian Army hands over ICU ventilators as gifts to Nepal 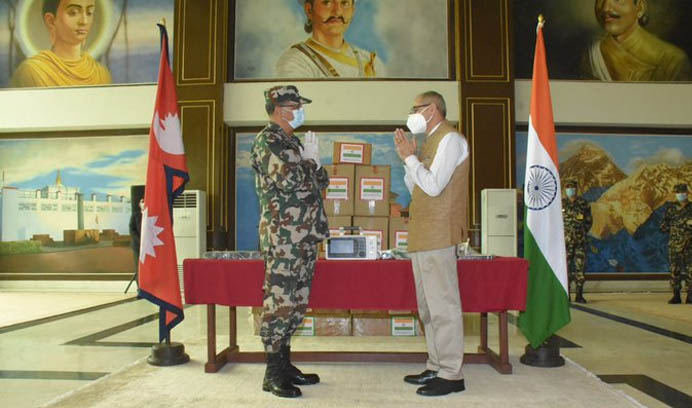 Ventilators were handed over to Nepal in a ceremony held at Nepalese Army headquarters in Kathmandu.

The Indian Army on Sunday extended its helping hand to Nepal by gifting 10 Intensive Care Unit (ICU) ventilators to the Nepalese Army to strengthen its fight against the deadly COVID-19 pandemic.

As per Zee News, the action is a part of continued humanitarian cooperation between Indian and Nepalese Army.

The ventilators were presented by Indian ambassador to Nepal, Vinay Mohan Kwatra to General Purna Chandra Thapa, Chief of Army Staff of Nepalese Army, who was made Honorary General of Indian Army by President Ram Nath Kovind last year.

The ventilators were handed over to Nepal in a ceremony held at Nepalese Army headquarters in Kathmandu. The report said that the Indian Ambassador promised India’s support to Nepal in tackling the COVID-19 outbreak in the Himalayan country. He reaffirmed India’s commitment to provide all necessary help to the people of Nepal.

This is not the first time that the Indian Army has extended a helping hand towards Nepalese Army but there is a long history of India being the first responder for humanitarian assistance and relief.

The ICU ventilators gifted to the Nepalese Army are portable and can perform several functions such as providing advanced invasive or non-invasive respiratory support. As these are light weighted machines, these ventilators can be transported from one place to another easily.