First 5 Rafale aircraft for India fly out of France 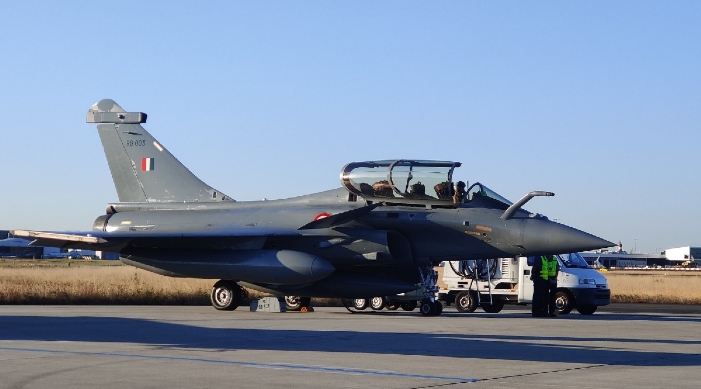 A Rafale jet ready to take off from an airbase in France. (Source: Twitter @Indian_Embassy)

Five of the 36 Rafale fighter aircraft took off for India from Istres airbase in France today. The Rafale jets will land at the Ambala Air Force Station on Wednesday, July 29, covering a distance of 7,364 kilometers.

The fighter jets that will provide a big boost to India’s defence capabilities are flown by Indian Air Force (IAF) pilots, said a Zee News report.

In a recent telephonic conversation, French Defence Minister Florence Parly informed India’s Defence Minister Rajnath Singh about the status of the delivery of the Rafale jets, said the report.

As per the contract between India and France, 36 IAF pilots are supposed to be trained on the Rafale combat jets by French aviators. To date, 12 IAF fighter pilots have “completed their training on the Rafale fighter jets in France and a few more are in the advanced phase of their training,” the Zee News report states.

According to the report, “the trainer Rafale aircraft will have the tail numbers of the RB series.” This has been done in honor of the IAF Chief RKS Bhaduria as he played a significant role in finalizing the deal, says the report.

In September 2016, India inked a Rs. 60,000-crore Rafale deal with France, to strengthen the capabilities of IAF.

Thirty of the 36 Rafale aircraft will be fighter jets while the rest will be used for training. The trainer jets will be twin-seaters and they will have almost all the features of the fighter jets, says the Zee News report.

The Rafale fighter jets are capable of carrying a wide range of weapon systems and are likely to be equipped with HAMMER missiles from France, according to the report.