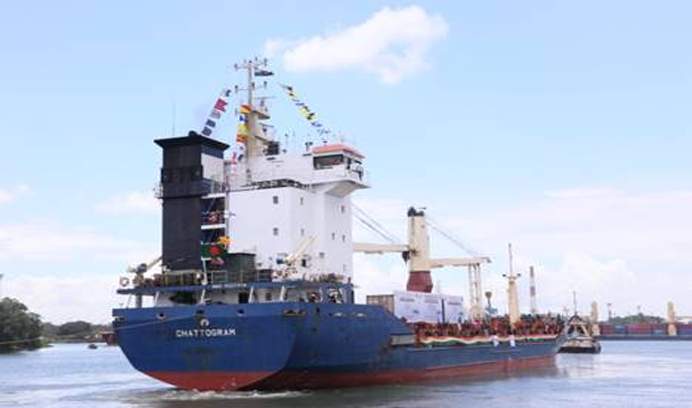 The first-ever trans-shipment of container cargo from Kolkata to Agartala via the Chattagram port in Bangladesh was completed successfully on Thursday, marking a new milestone in ties between the two countries.

The arrangement will reduce the distance and the time taken for goods to reach the northeastern states.

Describing the development as a “historic achievement”, Ministry of External Affairs spokesperson Anurag Srivastava said the operating procedures for the arrangement were finalized during the then Bangladesh President Sheikh Hasina Wazed in October 2019.

The development was in line with the vision of the two countries for further strengthening their bilateral relations, Srivastava said.

The shipment was carried out under the agreement on use of Chattogram and Mongla Ports for movement of India’s transit cargo through Bangladesh.

According to the Indian government, this operation will lead to job creation, investment in the logistical sector, enhanced business services and revenue generation to Bangladesh. Bangladeshi vessels and trucks will be utilized to move the Indian cargo.

A trial run of the trans-shipment between India and Bangladesh was conducted earlier this month, with container cargo being dispatched from the Kolkata port to Tripura via Bangladesh.

After being unloaded, the cargo was transported by road through Bangladesh to Agartala.

In a statement issued last week, the Ministry of Shipping had said that India and Bangladesh had enhanced cooperation in shipping and inland water trade over the past few years. Under the Protocol on Inland Water Transit and Trade, in addition to the six existing Ports of Call, five more in each country have been added recently.

Dredging of inland waterway routes is on in selected stretches of Bangladesh waterways with the Indian government bearing 80% of the project expenditure.

Cruise services have also commenced between the two countries promoting tourism and people to people contacts, the ministry’s statement said.