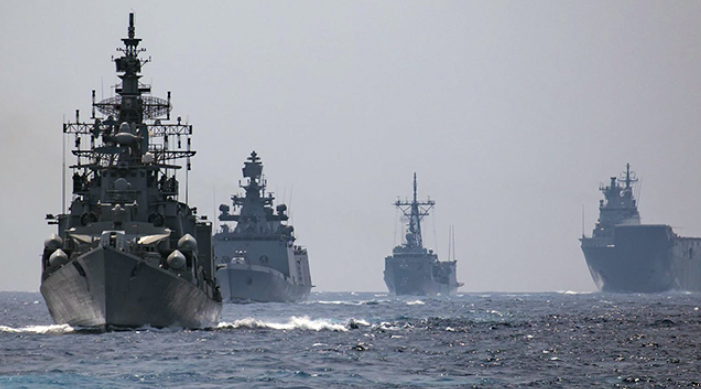 By undertaking symbolic ‘Quad’ naval drills in the Indian Ocean and the Philippines Sea, India, the US, Japan and Australia are trying to show that they have shed away their hesitation of the past while taking on China in the Indo-Pacific region

To send across China a message that its assertiveness would face a big wall from ‘Quad,’ representing India, America, Japan and Australia in the Indo-Pacific region, the US Navy has begun parallel exercises in the Philippines Sea and the Indian Ocean.

On Tuesday, the US Navy said it has begun a trilateral exercise in the Philippine Sea with Japan’s Maritime Self-Defense Force and the Australian Defence Force, reported Nikkei Asian Review.

According to the Japanese daily, the drill began on Sunday, the day before the start of the US and Indian navies' joint exercise in the Indian Ocean led by American aircraft carrier USS Nimitz.

Since 2007, India, the US, Japan and Australia have held on-again, off-again informal talks as the Quadrilateral Security Dialogue. But given the sensitivity of China, members like India, Australia and Japan were cautious not to paint the gathering as a military group or as the foundation of an Asian NATO.

But the symbolic move of holding exercises involving all four Quad countries in the Indo-Pacific region has had analysts wondering whether such “bashfulness,” in the words of a retired Indian Navy admiral, was receding.

The real test, according to analysts, will be whether the US, Japan and India invite Australia to their annual three-way Malabar exercise. Australia was invited to participate in 2007 as a nonpermanent member. But in 2018, India excluded the Australian forces to avoid the perception of a military group against China.

Following clashes on the Line of Actual Control in eastern Ladakh between Indian and Chinese soldiers and death of 20 Indian troops in the Galwan Valley, public sentiment in India is shifting rapidly against China.

The Japanese daily quoted Derek Grossman, a senior defence analyst at Rand Corp, a California-based institute as saying that, “With India appearing poised to invite Australia to the Malabar naval exercises this year, the symbolism will not be lost on China.”

It further said that with all four Quad members conducting a de facto Quad military exercise, their unified resolve to counter and compete with China across the Indo-Pacific region will not go unnoticed by Chinese authorities.

Read the story in details in Nikkei Asian Review: