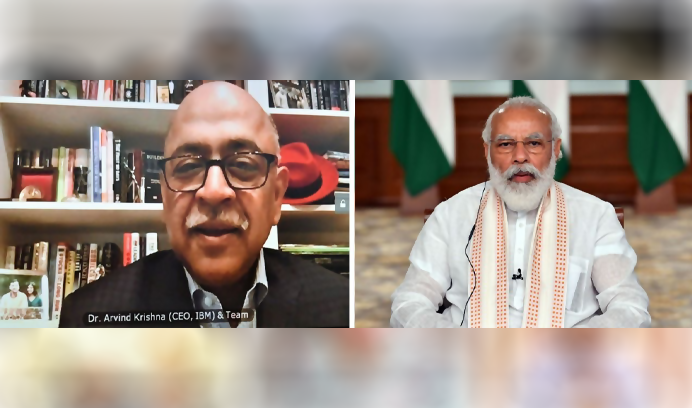 This is a great time to invest in India with the country welcoming and supporting investments in the technology sector, Prime Minister Narendra Modi told IBM Chief Executive Officer Arvind Krishna on Monday.

Foreign Direct Investment (FDI) inflow in India was increasing even as the world was witnessing a slowdown, the Prime Minister pointed out.

“Highlighted reasons that make India an attractive investment destination. Was happy to know more about @IBM’s efforts in furthering AI among students. I also thank @ArvindKrishna for his encouraging words on efforts like Ayushman Bharat & India’s journey to become Aatmanirbhar,” the Prime Minister added in a subsequent tweet.

According to an official statement, the Prime Minister told the IBM chief that ‘work from home’ was being adopted in a big way and the government was constantly working towards providing infrastructure, connectivity and regulatory environment to ensure that this technological shift is smooth.

During the conversation, he discussed the technologies associated and challenges involved in the recent decision of IBM to have 75% of its employees work from home.

He also mentioned the “strong connect” of IBM with India and its huge presence in the country, with over one lakh people working across 20 cities in the company.

The Prime Minister used the opportunity to highlight the government’s efforts to promote wellness and quality healthcare. He explored the possibilities of creating India specific AI based tools in the healthcare sector and development of better models for disease prediction and analysis.
He underlined that the country is moving towards development of an integrated, tech and data driven healthcare system which is affordable and hassle-free for the people. He noted that IBM can play an important role in taking forward the healthcare vision.

The IBM CEO talked about using technology for early identification of diseases.

The conversation came days after Google and Alphabet CEO Sundar Pichai interacted with the Prime Minister.

On July 13, Prime Minister Narendra Modi had a discussion with Pichai on a range of subjects, including leveraging technology to transform the lives of India’s farmers, youngsters and entrepreneurs.

They also spoke about the new work culture emerging in the times of COVID-19 and the challenges the global pandemic had brought. They also talked about the importance of data security and cyber safety.

The conversation was followed by Google announcing a USD 10 billion (Rs 75,000 crore) Digitization Fund to fuel the Indian economy’s growth.