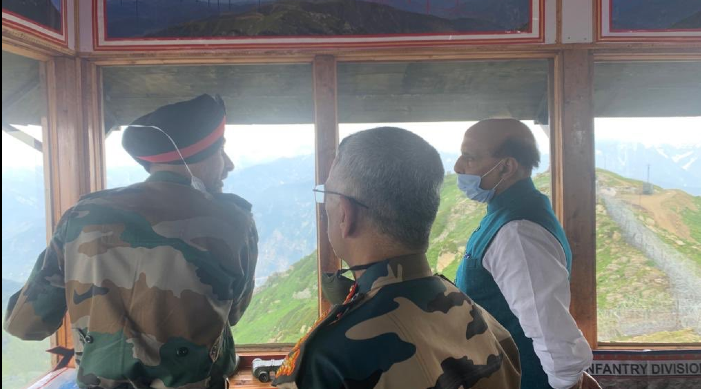 Just a day after his visit to the forward post in Leh, Defence Minister Rajnath Singh on Saturday made a trip to border areas along the Line of Control in the Keran sector in the Kupwara District of the Union Territory of Jammu and Kashmir.

“Visited a forward post near LoC in Kupwara District of Jammu-Kashmir today and interacted with the soldiers deployed there,” Singh tweeted along with photographs of his interaction with the soldiers.

“We are extremely proud of these brave and courageous soldiers who are defending our country in every situation,” the Defence Minister wrote.

During his visit to the Keran sector, the Defence Minister was accompanied by Chief of Defence Staff Bipin Rawat and Army Chief General M M Naravane. Senior defence officials briefed him about the situation on the border.

Defence Minister Singh on Friday reviewed overall security preparedness in Leh with the top military brass. He asked the armed forces to give a befitting reply to any “misadventure” by Pakistan.

Addressing troops in Lukung, around 40 km from Finger 4 where Chinese troops continue to occupy a ridgeline, Singh said, “Talks are currently underway to resolve the border dispute. The progress made in talks so far should resolve the matter. To what extent it will be resolved, I cannot guarantee but I want to assure you that no power in the world can touch an inch of Indian territory or capture it."