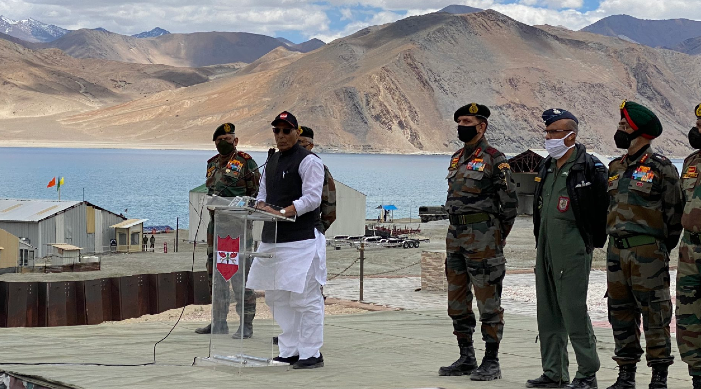 Talks being held between India and China should resolve the border dispute, Defence Minister Rajnath Singh said on Friday while interacting with Indian Army and Indo-Tibetan Border Police (ITBP) personnel at Lukung, a forward post in Ladakh. He, however, added that the extent of success "cannot be guaranteed".

Not an inch of our land can be taken by any power in the world, said Singh, who is on a two-day visit to LAdakh and Jammu & Kashmir.

India was the only country in the world which has given the message of peace to the entire world; it had neither attacked any country nor captured land to belong to another nation, the Defence Minister pointed out.

"But India will not tolerate any attempt to hurt its self-respect and give a befitting reply," he asserted.

Rajnath Singh’s comment on the progress of talks with China came a day after the Indian Army said that the India-China disengagement process is “intricate” and needs “constant verification”.

In a statement after the fourth round of Commander level talks was held on Tuesday, Indian Army spokesperson Colonel Aman Anand said, “The engagement was consistent with the consensus reached between the Special Representatives of India and China earlier, on 05 July, to discuss complete disengagement.”

According to the Indian Army spokesperson, “the Senior Commanders reviewed the progress on implementation of the first phase of disengagement and discussed further steps to ensure complete disengagement”.

The Defence Minister’s visit comes less than a fortnight after Prime Minister Narendra Modi made an unannounced visit to Leh, in Ladakh on July 4. “The era of expansionism is over,” he said in a thinly-veiled warning to China, while addressing troops.

The Prime Minister had also visited the Leh General Hospital and interacted with soldiers who had been injured during the violent face-off in eastern Ladakh’s Galwan Valley.

The situation along the China border had been tense since late April and matters took a serious turn on the night of June 15, which saw a violent face-off between Indian and Chinese troops.

India later said that 20 soldiers had been killed in action; China did not come out with any figure for casualties on its side, though some western intelligence assessments have been reported as saying that it had lost 43 personnel.