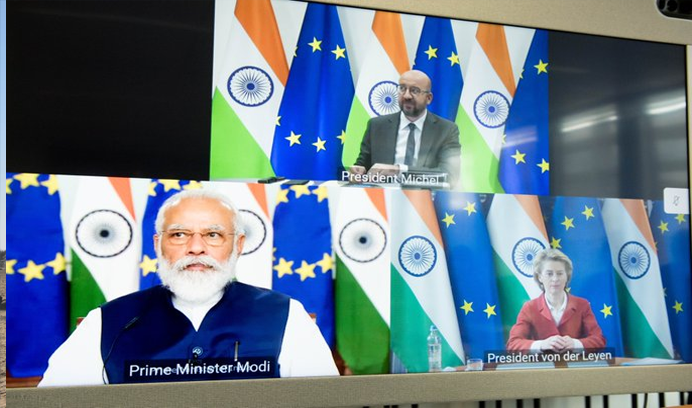 While Describing India and the 27-nation European Union as natural partners, Prime Minister Narendra Modi, during the 15th India-EU on Wednesday, called for the creation of an action-oriented agenda to be implemented within a stipulated time frame.

“India and the EU are natural partners. Our partnership is also useful for peace and stability in the world. This reality has become even more evident in today's global situation,” the Prime Minister said in his inaugural speech at the summit where the EU side was represented by European Council president Charles Michel and European Commission president Ursula von der Leyen.

At the summit, held in virtual mode after it was postponed in March due to the Covid-19 pandemic, emphasis was laid on strengthening of India-EU cooperation covering political and security relations, trade and investment and economic cooperation.

“We are committed to deepen relations between India and the EU. For this, we must adopt a long-term strategic perspective,” the Prime Minister said

He was of the view that since new problems have emerged in the economic field across the world in the aftermath of Covid-19 pandemic, democratic nations should come together to fight the challenges.

“Today, both the health and prosperity of our citizens are facing challenges. There are different types of pressures on rules-based international order. In such a situation, the Indo-EU partnership can play an important role in economic reconstruction, and in building a human-centric global order,” Prime Minister Modi said, adding long-term challenges like climate change are also a priority for both sides. He also invited investment and technology from Europe in the field of renewable energy.

The Prime Minister recalled that both India and the EU share universal values like democracy, pluralism, inclusivity, respect for international institutions, multilateralism, freedom and transparency.

Earlier, he expressed condolences for the damage caused by coronavirus across Europe