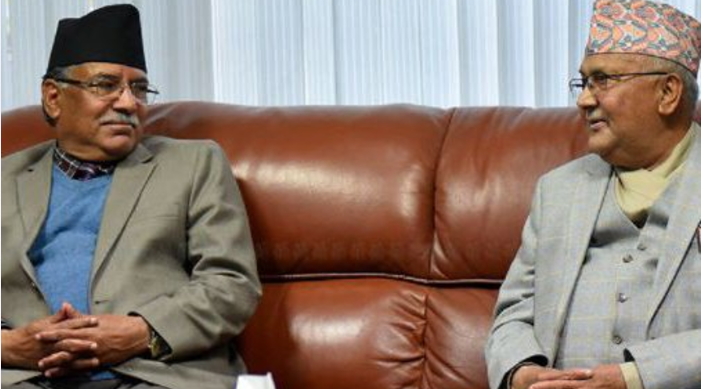 Though no Nepal Communist Party leader is in favour of split in the party, ground reality is neither Prime Minister K P Sharma Oli nor Prachanda is willing to blink over one man one post issue

Within the party, as per sources, there is a deep resentment over Oli’s dictatorial attitude and style of functioning.

Senior party leaders like Madhav Kumar Nepal, Bamdev Gautam and Jhalnath Khanal are miffed over K P Oli’ reluctance to follow the party’s rule to hold only one post at a time.

But Oli wants to remain the Prime Minister as well as the party’s chairman so that he could have an iron grip over the party and the nation.

NCP leaders, belonging to a faction headed by Madhav Kumar Nepal, want him to quit one post for the long term interest of the party.

On the other hand, Prachanda is of the view that 68-year-old Oli has failed to deliver quality administration at the time when the Himalayan country is fighting with the Covid-19 pandemic. He is also fuming that the national budget has not yet been presented in the parliament.

Besides, the former Prime Minister is miffed at the narrative given in social media and also in the country’s mainstream media that Oli alone could stand up to India on Kalapani, Lipulekh and Limpiyadhura issue.

Speaking at a programme in Chitwan, one of the districts of Nepal, Prachanda on Sunday said all party leaders collectively ensured Nepal’s map was updated and included in the national emblem. Therefore, nobody should take credit as a great nationalist and denounce others as anti-national agents.

“We all fought collectively against blockade. We all ensured passage of the new map. As Oli is the Prime Minister, he took the initiative to give validity to the new map because the party’s decision to revise the map was not enough,” Prachanda was quoted as saying by Kathmandu-based The Himalayan Times as saying.

He was upset that leaders close to Oli were instigating their supporters to take out rallies in support of the Prime Minister and denounce others who didn’t buy Oli's line of argument on domestic and international issues. More than this, what riles senior NCP leaders is the continued attempt by Prime Minister Oli to put off the party’s Standing Committee meeting on one pretext or another.

Oli’s supporters say the meeting is postponed in order to cool the temper inside the party which is staring at “challenges” in coming days. But then there is a fact that despite Oli and Prachanda holding six meetings between them, no headway has been made, resulting in uncertainty and chaos gripping the party.

This has cast a spell on the governance of the Himalayan country where spike in the Covid-19 pandemic cases and food grain and essential items’ price is giving common people tough time to fend themselves from these challenges.