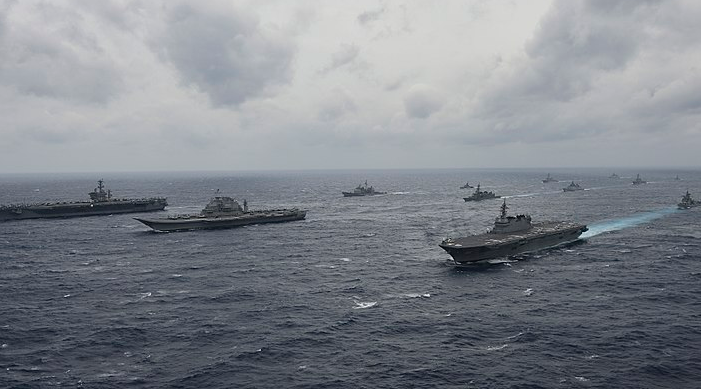 Australia, in most likelihood, will be invited by India for this year’s Malabar naval exercise, the annual event which includes the US and Japan.

According to Bloomberg news, India is expected to clear the way next week for a formal invitation to Australia following final government clearance and consultations with the US and Japan.

A plan to include Australia in the Malabar naval drill which is expected to take place at the end of this year, is likely to be firmed up at the time when India and China is caught up in their worst tension on the Line of Actual Control since 1975.

In May, India and Australia upgraded their ties to a Comprehensive Strategic Partnership during the first ever virtual summit between Prime Minister Narendra Modi and Australian Prime Minister Scott Morrison. The two countries also entered into the Mutual Logistic Support Agreement, giving access to each other’s bases and ports.

India, Japan, the US and Australia are also members of an informal Quadrilateral Security Dialogue, which has been now elevated from official level to foreign minister level engagement. Its creation is widely viewed as a response to increased Chinese economic and military power in the Indo-Pacific region.

In 1992, India and the US came together to hold the Malabar naval exercise in the Bay of Bengal on an annual basis. But China objected to this naval drill when Australia participated the exercise along with India, Japan, the US and Singapore in 2007.

Keeping in mind sensitivity of China, India had deliberately kept Australia away from the Malabar naval exercise. But such diplomatic niceties seem to have been given a go bye after the June 15 incident in which 20 Indian soldiers lost their lives in the violent face-off with Chinese soldiers in the Galwan Valley.

Read the complete article in Bloomberg