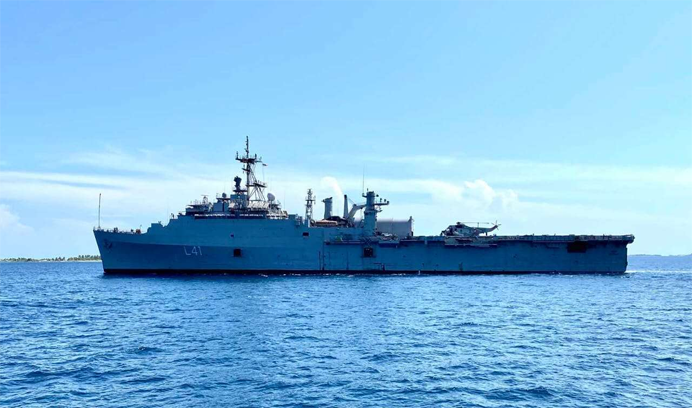 ‘Operation Samudra Setu’ was the third Indian Navy launched operation to bring Indians back from Sri Lanka, Maldives and Iran.

‘Operation Samudra Setu’ which was launched by the Indian Navy on May 5 to evacuate stranded Indians abroad due to the Covid-19 pandemic, culminated on Wednesday after successfully bringing 3,992 Indian citizens back to their homes by sea.

In the course of the 55-day evacuation exercise, the Indian Navy used ships like Jalashwa, Airavat, Shardul and Magar and traversed more than 23,000 km by sea.

Since the launch of ‘Operation Sukoon’ in 2006 to bring back Indians from Beirut and ‘Operation Rahat’ in 2015 to evacuate Indian nationals from Yemen, ‘Operation Samudra Setu’ was the third Indian Navy launched operation to bring Indians back from Sri Lanka, Maldives and Iran.

“Ships used for the operation were specially provisioned and the Sick Bay or the clinic onboard was especially equipped with COVID-19 related equipment and facilities. Women Officers and military nursing staff were also embarked for the women passengers. Basic amenities and medical facilities were provided to all evacuees during sea passage on these ships,” the Ministry of Defence said.

It added that one of the expectant mothers who undertook passage on Jalashwa, Sonia Jacob, also gave birth to a baby boy within a few hours of reaching Kochi on International Mother’s Day.

While under ‘Mission Sagar’, the Navy used Kesari, a landing ship to carry 580 tonnes of food aid and medical supplies to Maldives, Mauritius, Madagascar, Comoros Island and Seychelles. As part of ‘Mission Sagar,’ one medical team each was also deployed at Mauritius and Comoros Island.

All these operations were undertaken by the Indian Navy in close coordination with the Ministry of External Affairs, Home Affairs, Health and various other agencies of the Indian government and state governments.