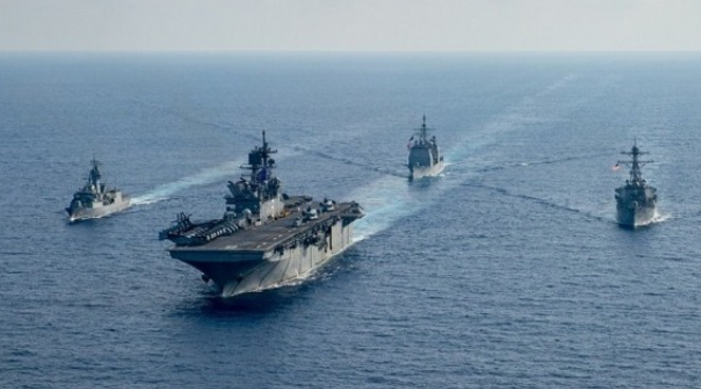 Representational photograph of a warship

Given China’s behaviour on the Line of Actual Control, India needs to be prepared for other areas of potential conflict with Beijing, former Foreign Secretary Vijay Gokhale maintains in his write up in the Indian Express. To this regard, he hints towards Indian Ocean where China is making its presence felt for a decade and more.

“The PLA Navy (PLAN) made its first operational deployment in the Gulf of Aden in 2008; in December 2009 retired PLAN Admiral Yin Zhuo referred to a possible overseas base or facility; in 2010 a China State Oceanic Administration report alluded to plans to build aircraft carriers.

“By 2012 China was ready to make the move into the Indian Ocean,” the former Foreign Secretary writes in his article, revealing how inside the Communist Party of China, a maritime rights and Interests Leading Group was set up in the same year and its report found its place in the document of the CPC during its 18th Party Congress in November 2012. According to him, CPC’s Congress saw the first official reference to “building China into a sea-power nation.”

He further says in October 2013, a plan presented as the 21st Century Maritime Silk Road in Jakarta, carefully wrapped in terms of trade and finance, in order to disguise its dual purpose.

While some Chinese scholars advanced the idea of building a harmonious ocean in May 2014, three Chinese researchers affiliated to the China Naval Research Institute laid out the real game-plan in their article, ‘The Strategic Scenario in the Indian Ocean and the Expansion of Chinese Naval Power.’

“Acknowledging that US hegemony and India’s regional influence in the Indian Ocean posed challenges to the Chinese plan, the authors laid out the inherent deficiencies that China needed to overcome,” the former Foreign Secretary maintains in his article, highlighting deficiencies presented by these Chinese authors included a) that China is not a littoral state; (b) its passage through key maritime straits could be easily blocked; and (c) the possibility of US-India cooperation against China.

These Chinese authors, as per Vijay Gokhale, suggested that these deficiencies might be overcome by (1) carefully selecting sites to build ports — Djibouti, Gwadar, Hambantota, Sittwe and Seychelles were specifically named; (2) by conducting activities in a low-key manner to “reduce the military colour as much as possible”; and (3) by not unnerving India and America by cooperating at first, then slowly penetrating into the Indian Ocean, beginning with detailed maritime surveys, ocean mapping, HADR, port construction and so on. The Chinese have moved precisely along those lines.

Read the article in detail in the Indian Express: