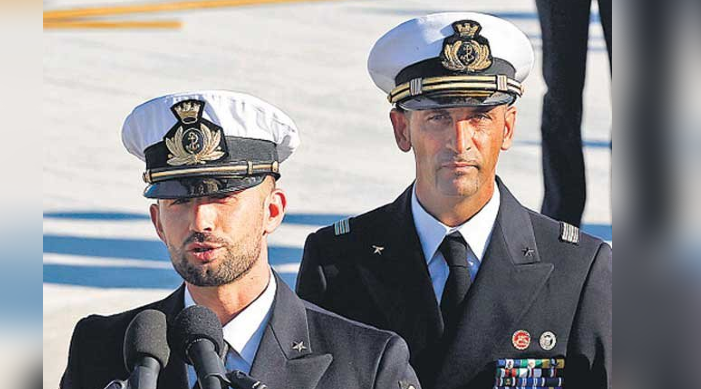 India has decided to accept the ruling by the Permanent Court of Arbitration at The Hague in the Italian marines case which pertains to the killing of the two Indian fishermen on board a vessel ‘St. Antony’ off the coast of Kerala, allegedly by two Italian marines travelling on board ‘Enrica Lexie,’ a tanker on February 15, 2012.

On Thursday, the Centre conveyed this to the Supreme Court, where proceedings in connection with the case are pending, and sought their disposal in view of the tribunal’s ruling.

The tribunal, constituted under Annex VII of the UN Convention on the Law of the Sea (UNCLOS) on the request of Italy on June 26, 2015, held that the actions of Italian marines-Salvatore Girone and Massimiliano Latorre-had breached India’s freedom of navigation under UNCLOS Article 87(I) (a) and 90. The tribunal had made its ruling in May, but pronounced its observation recently.

It observed that India and Italy had concurrent jurisdiction over the incident and valid legal basis to institute criminal proceedings against the two marines.

It rejected Italy’s claim to compensation for the detention of the marines, rather it observed that India was “entitled to compensation in connection with loss of life, physical harm, material damage to property and moral harm suffered by the captain and other crew members of St. Anthony.”

The tribunal held that the parties are invited to consult with each other with a view to reaching agreement on the amount of compensation due to India.

The Hague-based tribunal, however, observed that it shall retain jurisdiction should either party or both parties wish to apply for a ruling from the arbitral tribunal in respect of the quantification of compensation due to India.

But then it found that the immunities enjoyed by the marines as state officials operate as an exception to the jurisdiction of the Indian courts and, hence, preclude them from judging the marines.

Former additional solicitor general (ASG) P S Narasimha, who represented India during the early stage of case before the tribunal, doesn’t totally agree with this observation of The Hague-based court. Hindustan Times has quoted him saying that, “there might be problems with regard to tribunal’s finding on marines enjoying state immunity.”

He also held that the Italian marines case at The Hague will not affect India’s rights in the exclusive economic zone for fishing, exploration of gas.

Over all, the case had become a major bone of contention between India and Italy with the former insisting that it would try them as the incident occurred in its territorial waters. Italy’s argument was that since the ship flew an Italian flag and hence the crew would be tried under its law.