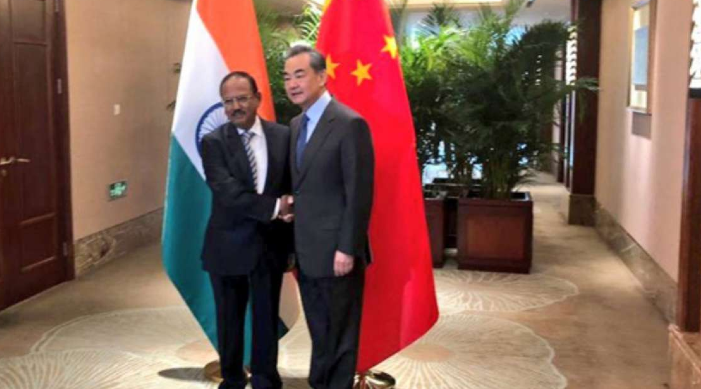 India and China have decided to de-escalate tension on the Line of Actual Control, 24 hours after NSA Ajit Doval held talks with Wang Yi, the Chinese Foreign Minister

Hinting towards de-escalation of tension along the Line of Actual Control, Chinese troops are believed to have taken steps to move back from the stand-off points in Galwan, the eastern Ladakh area which had witnessed a violent face-off between Indian and Chinese soldiers, resulting in the death of 20 Indian troops and unaccounted number of casualties from the Chinese side on June 15.

Sources say temporary structures built by PLA soldiers at the Galwan Valley and other areas are being removed by the Chinese side.

According to the Ministry of External Affairs, during these talks, both Doval and Wang Yi, who are Special Representatives of India and China on the boundary question, had a frank and in-depth exchange of views on the recent developments in the Western Sector of the India-China border areas.

The MEA note further said “the two Special Representatives agreed that both sides should take guidance from the consensus of the leaders that maintenance of peace and tranquillity in the India-China border areas was essential for the further development of our bilateral relations and that two sides should not allow differences to become disputes.”

The MEA added that both sides “agreed that it was necessary to ensure at the earliest complete disengagement of the troops along the LAC and de-escalation from India-China border areas for full restoration of peace and tranquillity.”

The two sides also agreed for a complete the ongoing disengagement process along the LAC expeditiously.

“The two sides should also ensure a phased and stepwise de-escalation in the India-China border areas. They re-affirmed that both sides should strictly respect and observe the line of actual control and should not take any unilateral action to alter the status quo and work together to avoid any incident in the future that could disturb peace and tranquillity in border areas.”

Also, the two Special Representatives agreed that the diplomatic and military officials of the two sides should continue their discussions, including under the framework of the Working Mechanism for Consultation and Coordination on India-China border affairs (WMCC), and implement the understandings reached in a timely manner to achieve the above outcomes.

It was also agreed that the two Special Representatives will continue their conversations to ensure full and enduring restoration of peace and tranquillity in the India-China border areas in accordance with the bilateral agreements and protocols.