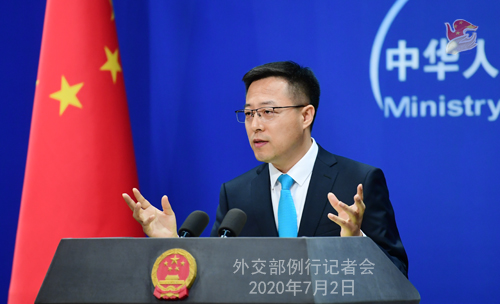 Prime Minister Narendra Modi’s visit to Nimu in Ladakh amid simmering tension between India and China on the Line of Actual Control, seems to have rattled Beijing.

Chinese Foreign Ministry spokesperson Zhao Lijian said India should not take any action that may escalate tension between the two countries.

“India and China are in communication and negotiations on lowering the temperatures through military and diplomatic channels. No party should engage in any action that may escalate the situation at this point,” Zhao told a press briefing, indicating that Beijing is nervous with Prime Minister Modi’s visit to the eastern Ladakh, the border front where two sides are standing face to face.

Earlier, while interacting with Indian army soldiers at Nimu in Ladakh, Prime Minister Modi delivered a firm message to China, stating “Era of expansionism is over.”

He reminded the people that “it is this mindset of expansionism that did great harm”(to world peace).

The Prime Minister said peace, friendship and courage have been a part of India’s culture since time immemorial, but it has “always given a befitting reply to anyone who has tried to disturb the prevailing atmosphere of peace and progress.”

He also said that India is committed to peace and friendship, but this commitment to peace should not be seen as its weakness.

“Today, India is becoming stronger, be it in naval might, air power, space power and the strength of our army. Modernization of weapons and upgradation of infrastructure has enhanced our defence capabilities multifold,” the Prime Minister said.

Indian soldiers had a long history of bravery and competence in global military campaigns, including in the two World wars, the Prime Minister said while paying rich tributes to the valour of Indian soldiers .

He said Indian soldiers’ courage and devotion to Mother India is unparalleled. Indians can go about their lives peacefully because they know that our soldiers are standing firm, protecting the nation.

The Prime Minister said that due to the exemplary bravery of the Armed Forces in the recent weeks, the world has taken note of India’s strength.