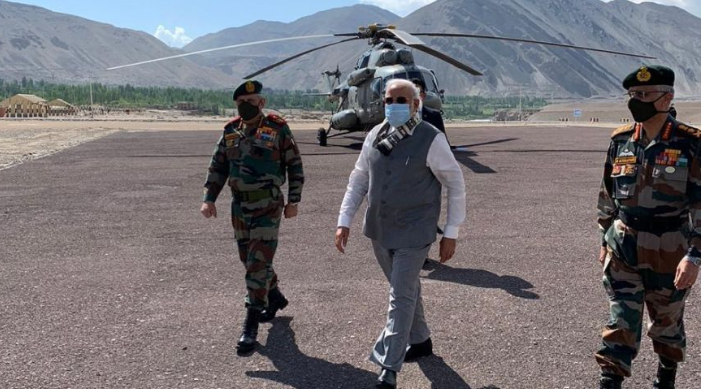 Prime Minister Narendra Modi on Friday made a surprise visit to Leh, the capital city of newly created Union Territory of Ladakh to take stock of the situation on the Line of Actual Control, where Indian and Chinese soldiers are facing each other since early May.

Located at 11,000 feet, Nimu is among the tough terrains, surrounded by Zanskar range and on the banks of the Indus.

As per various media reports, the Prime Minister is likely to meet the soldiers injured in the June 15 violent clash at Galwan Valley, in which 20 army personnel were killed.

The visit was a closely guarded secret with the entire security apparatus on high alert.

Earlier, Defence Minister Rajnath Singh was expected to visit Leh, but it was cancelled, for which reason was cited.

Indian and Chinese soldiers have been in stand-off position since early May on the LAC. On June 15, soldiers of the two countries were engaged in a violent face off, resulting in casualties on both sides.

While India came out open to announce that it lost 20 soldiers in that deadly face off, China has yet to disclose as to how many PLA troops succumb to injuries during the physical clash in which Chinese soldiers used iron rods, nail studded bats and stones to attack their Indian counterparts in the Galwan Valley. It was the first violent clash between the two sides since 1967.

However, to lower the tension between the two countries, senior commanders of Indian and Chinese armies have held three rounds of talks on June 6, June 22 and June 30. Besides, diplomatic engagement is also continuing in parallel for “expeditious, phased de-escalation in keeping with agreement reached by External Affairs Minister S Jaishankar and his Chinese counterpart Wang Yi on June 17.”

Despite this, nothing has happened on the ground. The Chinese soldiers are sayed put along the LAC in eastern Ladakh sector, giving a sense that they are for a long haul on the India-China border. As India is not prepared to take any chance vis-à-vis China, it has not only sent 45,000 troops on the border, it is also keeping a strict vigil on the activities of Chinese army along the LAC.