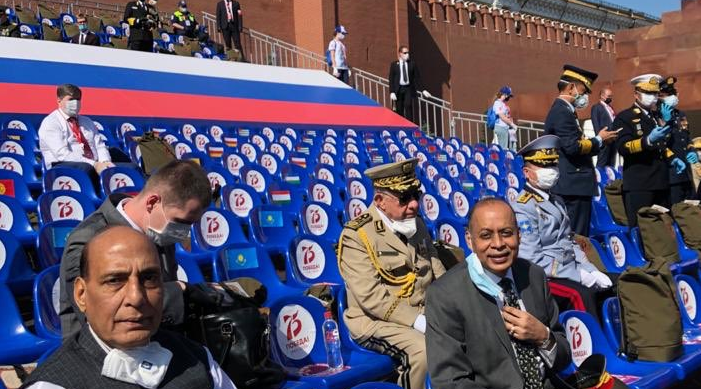 In view of militaristic challenges faced by India on its eastern front with China, New Delhi wants to leave nothing for chances when it comes to equipping armed forces with best available defence technologies.

This is what seems to be the objective of Defence Minister Rajnath Singh’s three-day visit to Moscow, where he landed on June 22 to attend the 75th anniversary of Victory Day Parade, considered as an important occasion for Russia and the world. This is his first foreign visit after the Covid-19 pandemic.

India wants faster delivery of the S-400 triumf air defence system. It is expected to be delivered in the late 2021, but India is keen to get it earlier. Besides, India wants additional 33 fighter jets Su-30 MKI and MiG-29 UPG class. India is also keen for the supplies of spares of military platforms in service.

“I had an opportunity to review our defence relationship with Deputy Prime Minister Yury Borisov and I thank him for the honour for visiting me in this hotel, despite the restrictions of the pandemic. My discussions were very positive and productive. I have been assured that ongoing contracts will be maintained and not just maintained, in a number of cases will be taken forward in a shorter time. All our proposals have received positive responses from the Russian side,” Defence Minister Rajnath Singh said in his tweet on June 23.

Speaking about India-Russia ties, the Defence Minister said, “India-Russia relations are one of Special and Privileged Strategic Partnership. Our defence relationship is one of its important pillars.”

Recalling the role of Indian soldiers during the World War II, the Defence Minister said, “Indian soldiers participated in the war effort in the millions and suffered immense casualties. Many of them were part of the war efforts to provide assistance to the Soviet Army.”

Russian President Vladimir Putin is expected to visit India later this year at the invitation of Prime Minister Narendra Modi.

Earlier the Defence Ministry denied Global Times report that Rajnath Singh will be meeting his Chinese counterpart Wei Fenghe in Moscow on the sidelines of the Victory Day Parade.

The Chinese mouthpiece in a tweet on Tuesday said: “Chinese Defense Minister Wei Fenghe will attend Russia's Victory Day parade in #Moscow on Wednesday, and likely hold a meeting with his Indian counterpart Rajnath Singh over resolving border tensions: sources.”