India needs to be firm in face of Chinese threat 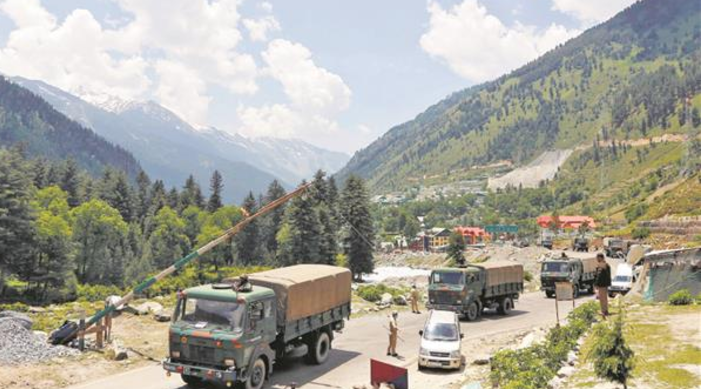 China seems to have got used to defying the laid-down rules of engagement involving international protocols, changing its stance unilaterally even in cases where formal negotiations and agreements had been reached

THE nation remembers the 1999 conflict with Pakistan so vividly because the media could provide live coverage from the frontline, located hundreds of miles away. That was the technology-aided service at the time. Today, media coverage, supported by technology, is identifying geographical landmarks and superimposing force levels on satellite imagery covering Chinese transgressions in eastern Ladakh. With such levels of transparency in near real-time reporting, not much can remain hidden for long.

The Chinese are capable of starting a conflict for reasons and logic that suit them. Therefore, most are kept guessing about their motives and intentions. Whatever be their aim for the present misadventure, they surely have a far bigger agenda this time around.

The standoff in 2013, for instance, was localised with limited troops. There was no aggression from either side, despite soldiers from the two armies standing guard merely 50 metres apart, by day and by night, at an altitude of approximately 16,000 ft above mean sea level. It can be stated with soldierly pride that our troops fared far better, mentally, emotionally and physically. Unlike them, we never had men falling sick with cold, cough and fever. Nor did we exhibit the fear of being ambushed at night, unlike their searchlights which lit the sky for most part of the night. However, the bonhomie at the battalion level between the two armies was heartening and reassuring.

This time, with multiple transgressions, large strength of troops, weapon resources, creation of infrastructure, including defence works and above all, the brutal physical offensiveness has been glaring and most disturbing. It may be prudent to deduce that this time the Chinese motive is an amalgam of military and diplomatic issues. Irrespective of this, we should be absolutely clear in our minds that the big bully with a straight expressionless face should not be permitted to have its way this time around. Enough is enough and we need to understand that in their 'heart of hearts', the dragon respects a strong opponent, while the weak ones are bullied at will.

There are distinct areas in eastern Ladakh which can be exploited by the Chinese with offensive intent. All these avenues commence from the western highway (NH-129), located further east of the LAC.

Sub Sector North (SSN): Daulat Beg Oldie and the Karakoram Pass are located in this sector. Known as the Depsang plains, the area is a high altitude plateau with an average height of 16,000 feet and is conducive for the employment of mechanised forces.

Area south of Depsang and north of Pangong Tso: It is characterised by narrow ingress valleys along small rivers and nullahs which meet the Shyok. These include Galwan, Raki etc. The confluence of Galwan with Shyok is vital and needs to be held with adequate strength, failing which the Darbuk-Shyok-DBO road can get threatened by ready domination and may thus cut off the land route to SSN. The Sasoma-Murgo road is likely to be a distant expectation.

Pangong Tso-Lukung: Fingers 1 to 8 are located on the northern banks of the lake and the road along this bank starts from Finger 5 and runs eastwards to meet the western highway.

Chushul-Dungti-Demchok: The Sirijap post located further east of the Fingers area was lost by us in 1962 and now they are claiming the areas till Finger 5. Such nibbling of our territory has been carrying on for years. Areas north of the lake are sensitive to them due to the ingress routes coming along the roads and tracks emanating from the western highway. This time, they have fortified their defence sited on dominating Finger heights. Evicting them would mean paying rather heavily for favourable results, and the situation could well result in a new status quo or realigned LAC. Surely, we seem to be in for a long haul.

The Dragon seems to have got used to defying the laid-down rules of engagement involving international protocols, thereby changing its stance unilaterally, even in cases where formal negotiations and agreements had been reached. Galwan, for instance, had never been disputed ever earlier until their recent claim.

In any case, we should continue with our infrastructure development as planned. Darbuk-Shyok-DBO road is the lifeline for our troops in the SSN and must be completed soon. Feeder roads going towards the LAC could always wait for a while. Technology to tackle permafrost has to be procured and Sasoma-Murgo axis completed. The vital road axis which is vulnerable to interdiction should be provided with requisite protection, even if certain areas have to be physically held. The criticality lies in the timely induction of our forces earmarked for SSN, including mechanised forces. Building up own forces in other areas of eastern Ladakh is not as challenging as the one for SSN.

Unified intelligence inputs are essential for such formations, including aerial, space and ground-based resources which compliment the desired area coverage for

timely decision-making. We may need to re-examine our operational philosophy to include the desired force levels to be maintained for physical occupation of vital areas and these should be placed on the orbit of this formation.

It may not be prudent to necessarily fight the enemy every time you encounter him. At times, it may be better to exercise the quid pro quo (QPQ) option. Therefore, QPQ should be undertaken in pre-selected options in eastern Ladakh or even in the central/eastern sectors in response to the present Chinese adventurism. Considering that the Chinese are creating turbulence for many nations around the world, it may be time for a collective economic boycott which should accrue overwhelming consequences. This would need widespread cooperation around the globe since the Chinese economy is the second largest in the world and growing.

Finally, we must settle for status quo ante as it existed in April-end this year, while simultaneously ensuring our operational preparedness for the next couple of months, prior to the onset of winter this year. Proud to notice the national unity, fervour, steadfastness and the offensive intent, but let us not forget the political constraints and allied compulsions in a democracy as compared to the communist system of governance.