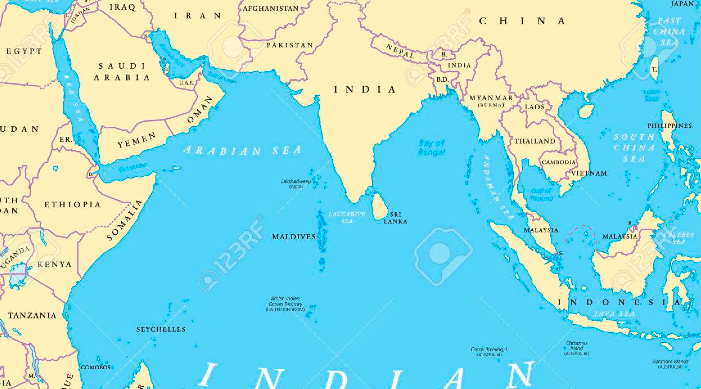 There is a need for coordination between the country’s national security agencies, the navy, disaster management and others for a comprehensive underwater strategy against China

At a time when China's pre-meditated military moves along our northern boundary are drawing the nation’s attention, it is important that we don’t lose sight of our surrounding seas.

Our navy has interdicted Chinese maritime research and survey vessels that entered our Exclusive Economic Zone (EEZ) and Continental Shelf (CS) without our prior consent in 2018 and 2019. I

India has legislation (Act No. 80/1976) that requires foreign marine scientific vessels to seek licence prior to undertaking activities. The Chinese claim that they are serving the interests of global scientific research.

That may well be one purpose; but it is well-known that China uses civilian research vessels to gather crucial oceanographic data, such as sub-sea and sea-bed conditions, for military purposes. It has done so in the South China Sea without heed to protests by claimant states or international law.

To put this into perspective, one recent survey done by the Asia Maritime Transparency Initiative (CSIS), shows that between April 2019 and March 2020, China deployed 25 maritime survey missions in the Indo-Pacific. This figure is only marginally less than the 27 missions mounted by the next six countries taken cumulatively — US (10), Japan (6), India (4), Australia (3), France (3) and the Philippines (1).

Earlier this year, the Australians voiced concern over the activities of the Chinese vessel Xiang Yang Hong No. 1 in international waters between the Australian mainland and Christmas Island. They suspected that aside from marine science research, the ship was also studying submarine routes from Australia into the South China Sea.

This, incidentally, is the same vessel that operated in international waters just south of the Andaman & Nicobar Islands from April 15 to May 21, 2019, presumably with similar objectives. China has mounted at least six survey missions covering the waters between Indonesia and Sri Lanka, in the Bay of Bengal and the Northern Arabian Sea, in 2019-2020.

The Cambodian opposition leader, Sam Rainsy, wrote recently in Foreign Affairs that China follows a “pattern of denial and obfuscation” in its military expansion overseas. Beijing initially denied its intention to militarise the Spratly Islands but eventually acknowledged that they serve a military purpose. A similar pattern surrounded the Chinese military base in the Horn of Africa. Nobody any longer accepts China’s claim that the Djibouti base is simply a logistics facility.

Rainsy has expressed concern over a secret deal that gives China exclusive access to Cambodia’s Ream Naval Base. If this report is accurate, it will bring China one step closer to our shores. This is not the only concern to be had. It is also believed that PLA Navy (PLAN) intelligence-gathering ships have sailed our coast-line to gather information on naval facilities and ships. It will, almost certainly, do so again.

China may well take the position that both activities are legitimate under international law. The Law of the Sea Convention says that military vessels have “right to innocent passage” to traverse the territorial sea of a coastal state without entering internal waters so long as they are not prejudicial to peace, good order and security of the coastal state.

The Convention is also open to different interpretations on the question of scientific surveys in the EEZ of coastal states. The US, for instance, maintains that hydrographical surveys without prior notice or consent are lawful in line with centuries of state practice, customary and international law and Articles 58, 86 and 87 of the Convention.

However, it is worth noting that China herself explicitly requires all foreign marine research, and for that matter military, vessels to seek prior permission before they enter China’s territorial seas as defined in their Declaration on the Territorial Sea (1958). The question, therefore, is whether China will respect the laws of other coastal states like India. In that regard, recent Chinese behaviour in the South China Sea does not give reason for optimism.

It is a reasonable presumption that the completion of Gwadar and the use of Ream (Cambodia) if such a report is confirmed, will make it easier for China to sustain naval deployments — including submarines — in the Indian Ocean. The collection of vital hydrographical data is critical to their understanding of the sub-surface environment, particularly around the Andaman Islands, which is a choke-point from the Chinese perspective, as well as to monitor our own submarine movements.

It should, therefore, be presumed that in the coming 12-24 months, the Chinese could step up their efforts to secure significantly improved data in the seas between the Malacca Straits and Djibouti, especially in the Bay of Bengal and Arabian Sea, through any one, or all, of the following.

First, the Chinese might try to send another survey vessel without our permission into our EEZ, even possibly under naval escort. In May, the Chinese survey vessel Haiyang Dizhi No. 8 accompanied by two Chinese coast guard ships and several fishing vessels (probably maritime militia) entered the Malaysian EEZ in the South China Sea for over a month despite Malaysian protests. Such action would contravene Indian law but the Chinese have never been deterred by finer points of the law.

Second, more likely, they might deploy unmanned underwater drones in our EEZ, while the mother vessel remains just outside. A recent Forbes report claims that Sea-Wing underwater, unmanned drones were launched from the Xiang Yang Hong No. 6 in mid-December 2019 and successfully retrieved in February 2020. That should be a matter of our immediate concern as during that period this very ship was in the Bay of Bengal from January 27 to February 24.

Third, China might sail PLAN intelligence-gathering ships along our coasts or in the waters off our island territories, just outside the 12 nautical mile limit, on grounds that this is “innocent passage” by naval vessels permissible under relevant provisions of the Convention; in other words the Chinese version of Freedom of Navigation operations.

We have the necessary capacity to monitor and interdict survey vessels well before they enter our EEZ. The need for a comprehensive Underwater Domain Awareness (UDA) strategy is pressing. This will need coordination between our national security agencies, the navy, and the government departments responsible for the marine environment and disaster management, but also collaboration with like-minded countries who share our concerns.

Such cooperation includes, inter alia, deepening of real-time information exchange, co-development and deployment of UDA monitoring devices and joint processing of acoustic signatures, and closer coordination in the patrolling of sea lanes to ensure a free and open Indo-Pacific.

The deployment of PLAN intelligence-gathering ships with naval escort along our coasts might also require a new sort of response. We should learn from Chinese tactics. A RAND study describes how they use fishing boats, which are actually “maritime militia”, to overwhelm the external adversary with swarm-tactics, supported from the rear by coast-guard or naval vessels.

This is below the threshold of a military response, and a successful, albeit crude, way of blocking the PLAN vessel. We have multiple fishing communities that can be provided with the capacity and training for such purposes. Building Maritime Domain Awareness, and especially Underwater Domain Awareness (UDA) capabilities and technology, both domestically and with like-minded partners, should be given the highest priority. There may not be more time to lose.