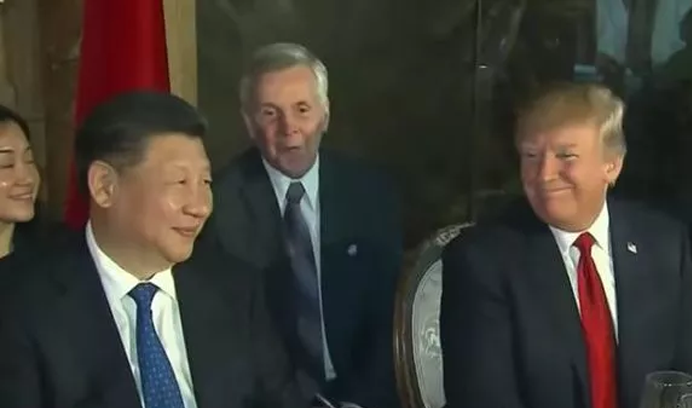 China could exploit the tension with India to strike the US (Image: MSNBC)

World War 3 fears have rocketed once again as China and India continue to trade blows over their disputed border, with concerns the conflict could evolve into a larger "proxy war" with the US.

China and India have been locked into a bitter dispute over their common border for over a month, with the situation escalating into violent clashes that left 20 Indian soldiers dead. Both sides have been claiming control over 500-miles of mountains over the Himalayas for decades but the latest round of disagreement has sparked concerns of a larger-scale conflict between the two nuclear powers. German English language broadcaster DW host Brent Goff questioned South Asian Affairs analyst Kyle Gardner whether the skirmish could evolve into involving the US.

Mr Goff said: "There is a lot of talk about a new Cold War between the US and China and that puts India in a position where it has to choose.

"Of course, it would choose the United States.

"If this were to become a serious conflagration, what is the risk of this becoming a proxy war between China and the US? Do you see that risk being significant?"

Mr Gardner conceded there is a risk of the China vs India ongoing border dispute escalating after the confrontation turned violent earlier this week.

He said: "There is certainly a risk there.

"Despite trade tensions between the US and India, I think it’s absolutely fair to say relationships have grown warmer and closer, particularly in terms of defence. That said, US and China relations are also growing colder.

"There is no doubt where the US falls in this dispute and statements that have come out in recent weeks from various US officials have supported that.

"President Trump tweeted weeks ago he wanted to mediate which is something neither side wants. But there certainly is a risk of this becoming a larger geopolitical issue."

China and the US have been engaged in an ongoing trade war since the election of US President Donald Trump in 2016.

President Trump has accused Beijing of unfair competition threatening the livelihoods of US workers and has imposed a series of sanctions on Chinese-made products in a bid to push Xi Jinping to adopt better regulation.

But with Mr Trump questioning China's involvement in the coronavirus pandemic, the relationship between the two countries has grown tenser in the past few months.

Some political analysts have suggested Beijing may seek to exploit the attention the international community is paying to the outbreak to make gains over other countries.