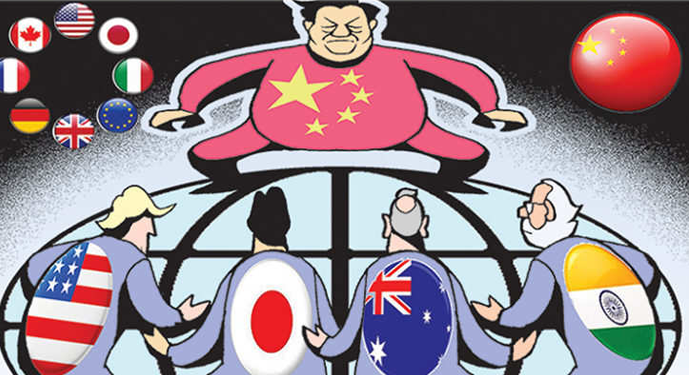 China’s irresponsible conduct during the pandemic has woken the world up to the dangers of getting seduced by Beijing’s economic heft.

Contemporary global order is rapidly adjusting to the “new normal” defined by Covid-19 and new equations are forming with a speed that a few months back would have been unthinkable. Democratic values are becoming an integral part of this global order rejig. Early this month an Inter-Parliamentary Alliance of senior lawmakers from eight democracies, including the US, Germany, the UK, Japan, Australia, Canada, Sweden and Norway, was set up to “construct appropriate and coordinated responses, and to help craft a proactive and strategic approach on issues related to the People’s Republic of China”.

Arguing that China’s economic rise has put the global, rules based order under tremendous pressure, and that standing up to Beijing alone involves great cost for nations, this group is calling upon democratic countries “to unite in a common defence of our shared values”. US Republican Senator Marco Rubio and Democrat Bob Menendez, former Japanese defence minister Gen Nakatani, European Parliament foreign affairs committee member Miriam Lexmann and senior UK Tory leader Iain Duncan Smith are some of the prominent members of this group.

China’s irresponsible conduct during the pandemic has woken the world up to the dangers of getting seduced by Beijing’s economic heft. As part of this pushback, democracy has emerged the central pivot around which the future global order is being sought to be constructed by several stakeholders. The UK is also reportedly seeking an alliance of ten democracies, the G-7 countries along with India, Australia and South Korea to create alternative suppliers of 5G equipment and other technologies, so as to get out of the clutches of Chinese dependence.

Just months after giving Chinese telecom giant Huawei entry into the UK’s 5G network, the Boris Johnson government is under pressure to review its decision. Even as a review of its earlier decision is underway, London is stepping up the diplomatic initiative of bringing likeminded democracies together. China’s behaviour over the last few months has perhaps made it easier for the UK for push for an initiative explicitly targeted at Beijing.

The US, for its part, has been targeting China for long. Recently US President Donald Trump postponed the G-7 summit he wanted to hold next month until September or later with the caveat that he would be expanding the list of invitees to include Australia, Russia, South Korea and India. His expansion idea is premised on the argument that the G-7 as it stands is a “very outdated group of countries”.

Later in his phone call to Prime Minister Narendra Modi, he extended an invitation to attend the next G-7 summit in the US. Modi reciprocated by commending Trump for “his creative and far-sighted approach, acknowledging the fact that such an expanded forum would be in keeping with the emerging realities of the post-Covid-19 world”. While Russia is clearly the outlier in the Trump plan, the democratic underpinnings of the proposed expansion are quite evident. That China got the message was clear from the Chinese media’s attacks on the plan as well as on India by underscoring that New Delhi was playing with fire by accepting Trump’s plan.

Debates on the future of global multilateral order have been going on for quite some time now. It had been quite clear that the extant global institutional framework was not quite up to the task of managing emerging challenges. But there was little clarity on the way forward. India along with many other countries has been talking about reforming the multilateral order for the past two decades without anyone paying any heed to it. It was the financial crisis of 2007-08 that led to the emergence of G-20. But it was a temporary aberration as G-20 itself has struggled to make any meaningful headway.

The global multilateral order has been under attack from several fronts. On the one hand, the US under the Trump Administration has been least concerned about multilateralism. Trump’s ‘America First’ meant that he had no time and interest for multilateral reforms. So one by one he withdrew his nation from global frameworks and institutions. That gave space to China to try to project itself as the great saviour of the existing global order.

While a large part of the world deluded itself into believing that Beijing would eventually emerge as a responsible global stakeholder, it took the shock of Covid-19 for the world to emerge from its slumber. From the UN Security Council to WHO and G-20, none of the global platforms could emerge with any degree of credibility under the weight of Chinese onslaught.

As a consequence, finally the time for debates has ended and we are witnessing an attempt by major powers to seriously grapple with the challenge of building new platforms and institutions at a time of serious fragmentation in the global institutional matrix. This fragmentation has allowed the issue of democracy to come front and centre.

New Delhi has long been touting its democratic credentials to underscore the point that it is different from China. Despite India’s attempts to underplay them, these democratic values have emerged as crucial variables in the way Indian foreign policy trajectory has evolved in the last few years, be it in its engagement with the West or with major players in the Indo-Pacific. The Quad is a manifestation of this dynamic even if none of the countries involved wants to emphasise it.

With the global order rapidly transitioning into a new phase where contestation between the democratic world and China is going to be the major faultline, Indian policymakers will have to come to terms with this democracy dynamic. Even though New Delhi might find it difficult to articulate it, the choice is quite clear.