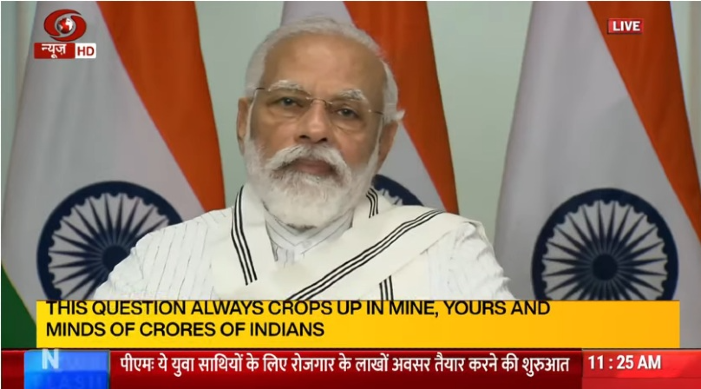 Addressing the launching of auction of 41 coal mines for commercial mining, Prime Minister Narendra Modi said India has taken the big decision to fully open the coal and mining sector for competition

Addressing the launching of auction of 41 coal mines for commercial mining via video conference, Mr Modi said a major step has been taken today to make India self reliant in the Energy sector. He said the government is not only launching an auction for commercial coal mining, but also taking the coal sector out of decades of lockdown.

He said allowing the private sector in commercial coal mining is unlocking resources of a nation with the world's fourth largest reserves. Criticising last policies of keeping the sector closed, the Prime Minister said India should be the world's biggest coal exporter considering the size of reserves.

He pointed out the irony that India has the fourth largest coal reserve in the world, is the second largest producer in the world, but is also the second largest coal importer. He said the situation lasted for decades and the coal sector was kept entangled in the web of Captive and Non Captive. He added that the sector was excluded from competition and transparency was a big problem.

The Prime Minister said the reforms in the coal sector are a great way to make Eastern and Central India, and the tribal belt the pillars of development. He said there are 16 aspirational districts in the country which have large reserves of coal but have not benefited the local people as much as they should have. He said reforms and investment in this sector will play a huge role in making lives easy for the poor and tribal people.

Mr Modi said the commercial coal block auction is a win win for industry users. He said new resources will open up and states will get more revenue and employment. The Prime Minister also said the government has set a target to gasify around 100 million tonnes of coal by 2030. He said four projects have been identified for this and about 20 thousand crores will be invested in them.

Mr Modi said India will overcome the Covid pandemic and the country will turn this crisis into opportunity. He said the pandemic has taught India the lesson of being self reliant. The Prime Minister said an Atmanirbhar Bharat means reducing dependency on imports, and saving crores of foreign currency.

He said an Atmanirbhar Bharat entails that India will develop resources so that the country does not have to rely on imports. Mr Modi said all indicators are showing that Indian economy is ready to bounce back quickly and has moved forward.