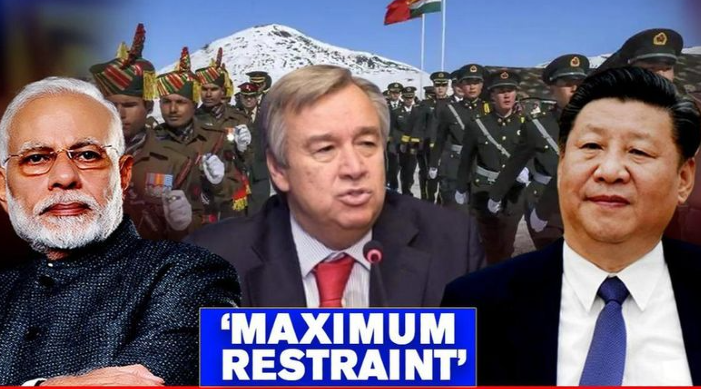 UN Secretary-General Antonio Guterres on Tuesday expressed concern over reports of violence and deaths at the Line of Actual Control (LAC) between India and China and urged both sides to exercise "maximum restraint".

'We take positive note of reports...'
"We are concerned about reports of violence and deaths at the Line of Actual Control (LAC) between India and China and urge both sides to exercise maximum restraint. We take positive note of reports that the two countries have engaged to deescalate the situation," said Eri Kaneko, Associate Spokesperson of UN chief Antonio Guterres.

Kaneko made the comments at the daily press briefing while responding to a question on the death of Indian Army personnel in a violent face-off in Ladakh's Galwan Valley amid escalating tensions at the LAC.

20 Indian soldiers martyred
The Indian Army on Tuesday issued an official statement on the violent face-off that took place on June 15 at the Line of Actual Control. It mentioned that both sides had disengaged at the Galwan area. Moreover, it added that 17 more troops who were critically injured in the line of duty had succumbed to their injuries. This has propelled the number of Indian Army personnel martyred at the LAC to 20.

China has not released any information on the casualties suffered by the People's Liberation Army soldiers during the violent face-off in eastern Ladakh. While at least 20 Indians soldiers were martyred, 43 casualties have also been reported from the Chinese side.

During the face-off, the External Affairs Ministry said, both sides suffered casualties and the Chinese side had departed from the consensus to respect the LAC in the Galway valley. The face-off happened on late evening and night of June 15 in Ladakh's Galwan Valley as a result of an attempt by the Chinese troops to "unilaterally change" the status quo during de-escalation in Eastern Ladakh.

Prime Minister Narendra Modi also held a high-level meeting with Defence Minister Rajnath Singh and Home Minister Amit Shah in the evening where he carried out a comprehensive review of the situation in eastern Ladakh where the two armies have been in a standoff for over five weeks.