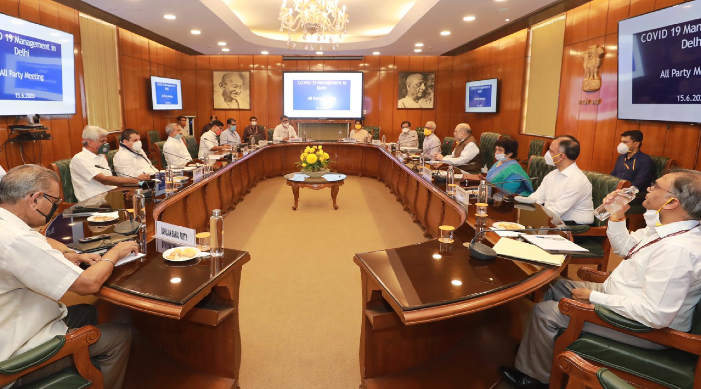 Union Home Minister Amit Shah has urged all parties in Delhi to look beyond their political differences and work together to contain the spread of Covid-19 in the national capital.

The fight against Covid-19 would be strengthened and people would feel reassured if all political parties worked in a united manner, Shah said on Twitter after the meeting on Monday.

The situation in Delhi has emerged as a matter of concern with the number of confirmed cases of Covid-19 continuing to rise.

According to data released by the Ministry of Health and Family Welfare on Monday morning, Delhi had 41,182 confirmed cases and 24,032 active cases. Unlike the consolidated all-India numbers, Delhi has more active cases than recovered or cured patients which stands at 15,823. The national capital has reported 1,327 deaths.

Delhi Chief Minister Arvind Kejriwal meanwhile rejected reports that another lockdown was being planned in Delhi, which has witnessed a continuous increase in the number of confirmed cases.

“Many people are speculating whether another lockdown in Delhi in being planned. There are no such plans,” Kejriwal said on Twitter on Monday.

The Union Home Minister’s meeting came a day after he interacted with Kejriwal, Lieutenant Governor Anil Baijal, Mayors and commissioners of the city’s municipal bodies, and senior health department officials to take stock of the situation. Union Minister of Health and Family Welfare Dr Harsh Vardhan was also present.

During Sunday’s meeting, it was decided to double the number of tests for coronavirus within two days. This number needed to be trebled in six days, Shah had emphasised during the meeting.

The Union Home Minister also asked for house-to-house surveys in Containment Zones in Delhi in order to improve contact mapping. Another important decision was to make testing facilities available in each polling station area of Delhi.

Shah emphasized effective monitoring by asking all residents to download the Aarogya Setu app on their mobile phones. He also said the Centre is committed to check the Covid-19 spread in the national capital.

Prime Minister Narendra Modi is scheduled to talk to the Chief Ministers of all the states over two days on June 16 and 17 to review the Covid-19 situation. On Saturday, PM Modi had chaired a meeting to review India’s response to Covid-19 as the number of confirmed cases continued to rise.

During the meeting, senior officials pointed out that two-thirds of the total cases in India were in 5 states; of this, an overwhelming number of cases were in the big cities.

The meeting discussed an increase in testing as well as the number of beds and services to effectively handle the peak surge of daily cases, particularly in the large cities.