India invited to G-7 Camp David summit. What are the dynamics? 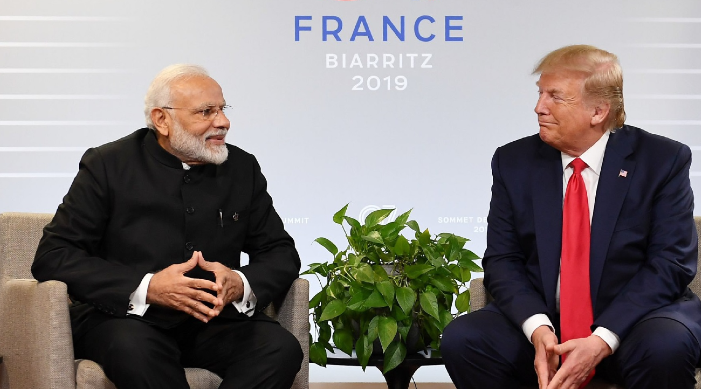 File photo of PM Narendra Modi meeting US President Donald Trump at the G7 Summit in France in 2019.

During a 25-minute telephonic talk on June 2, US President Donald Trump invited Prime Minister Narendra Modi to the G-7 Summit likely to be held in Camp David in September this year. Originally scheduled for 10-12 June, the summit had to be postponed owing to the corona pandemic.

G-7 was founded in 1975 by the then seven top economies of the world as an informal forum to discuss pressing world issues. Canada joined in 1976, EU in 1977 and Russia in 1997 (but only to be expelled in 2014). The organisation has been discussing economic and other issues as well. In that sense, the organisation is within its bounds to discuss China as is proposed by President Trump, the host to the meet.

Trump has been nursing the idea of expanding the representative character of G-7. He also favours re-admission of Russian Federation expelled in 2014 following its annexation of Crimea. Trump argues that the importance of the Russian role in global strategy cannot be underestimated. The rise of China, India and Brazil on the global economic map has made G-7 somewhat beside the point because its share in the global GDP has fallen to 40 per cent.

President Trump has also invited Russia, Australia and South Korea besides India to the impending G-7 Summit. In a press release, our Ministry of External Affairs praised Trump for his “creative and far-sighted approach” adding that such an expanded forum will be in tune with the realities of the post-COVID-19 world.

However, while appreciating the expansion move, Russia has questioned the wisdom of excluding China from the forum as it puts a question mark on the representative character of the organisation. In a blunt statement, Moscow said that “if Trump wants to create an anti-China coalition and discuss the future of China, he may be disappointed. Few will support such an undertaking.”

South Korea, alive to her strategic sensitivity, too, has shown some hesitation. An official spokesperson said that while the US was a friendly country, China was a neighbour and that South Korea would like to be realistic.

As expected, Beijing reacted sharply to the American move. Foreign office spokesperson Lijian Zhao said, “Any attempt to seek a small circle against China is doomed to fail and is unpopular.” China feels confident she has many supporters world over.

A careful analysis of the issue reveals some hitches inherent in the idea of expanding the organisation. For example, the United Kingdom had, at one time, proposed a G-7+3 meaning Australia, India and South Korea. The immediate trigger for the UK’s idea was concern over cybersecurity given the Huawei controversy and the need to reduce dependence on China for 5G technology. Following the US' imposition of additional sanctions against Huawei, the National Cyber Security Centre has been looking after the impact on the UK's networks. The UK has categorically rejected Russia's inclusion and has even threatened to use a veto option if any attempt is made to bring in Russia.

Canada, too, objects to Russia's inclusion arguing that Moscow has been showing scant respect for the international law. France and Germany, two important members of the EU and also of the G-7, are not enthusiastic about the expansion idea of G-7 nor are they convinced of the wisdom of isolating China.

In this complex discourse, our interest lies in knowing how India is going to handle the situation arising out of the invitation of President Trump, which Modi is reported to have accepted in his telephonic talk. It will be remembered that the French President Macron had also extended a personal invitation to PM Modi last year to attend the G-7 summit held in his country. But today the situation is different.

Dispassionate study reveals that there is no one opinion on the subject among Indian commentators. Those who do not find any noteworthy good coming out of the expanded G-7 to India put forth their case as follows. It is not clear whether the invitation to India from President Trump is for permanent membership of G-7 or just as an observer. In the latter case, the invitation is more or less an embarrassment. As, being just an observer at the summit indirectly means that the organisation is not yet willing to acknowledge India as a growing economic power on the globe.

Secondly, will India, with barely $ 2,000 per capita income, be happy going along with the richest countries and the strongest economies in the world? How will other groupings like SAARC, ASIAN or NAM interpret it? India’s close neighbours in South Asia like Sri Lanka, Singapore, Bangladesh, Malaysia, and Bhutan will anxiously track the unfolding events.

Presuming that India gets the membership in the expansion plan, the political fallout of such a decision will be that the Sino-Indian holdup will further intensify. It could negatively impact whatever little personal equation has been created assiduously between Prime Minister Modi and President Xi. After all, excluding China from an expanded G-7 while she continues to be in G-20 is a clear message that a coalition against China is envisaged. It is also clear from the invitation of President Trump to Russia that the September Summit Meet in Camp David would consider the matter of China.

What is to be considered about China is the core of America's ani-China grouse. For example, Trump is wary about the unjustifiable trade imbalance between the US and China. China has expanded her economy to jump to number one position on the list of great economies of the contemporary world. China has been demonstrating aggressive posture against her small neighbours in SouthEast Asia besides the big countries like Japan and India --- with which she has more than 3,400 kilometres long border. Beijing is nibbling all along the southern and western border by taking advantage of the illegal annexation of Tibet. China has floated several schemes that will help her ultimately attain the most influential position in Asian strategies. Power through the economy is the new mantra through which China has penetrated deep into the UN and other international bodies and poses a strategic threat to the US and her allies, especially in the India–Pacific region and the Straits of Malacca through which maximum trade of the world is carried. Her aggressive postures towards smaller countries in her neighbourhood endanger international peace.

This apart, India has her troubles with China also. The way China betrayed the trust India had reposed in her friendship after the Bandung conference, and then the 1962 incursion by Chinese PLA into our eastern region followed by aggressive postures against Arunachal Pradesh, Ladakh border, Doklam and more recently in Eastern Ladakh in Galwan Valley all indicate that China wants to keep the border issue simmering so that she does sword rattling intermittently to subdue India.

Because of this ground reality, we are disposed to think that the time has come for India to change the narrative from weakness to strength as an economic and military power in Asia not next to but at par with China. India needs to befriend strong and dependable partners to ensure peace and tranquillity not only along the Sino-Indian border but also in the entire South Asian region where international interests converge. Security of the region is imperative and a matter of concern given how China-Pakistan camaraderie has helped China establish massive PLA presence in the Himalayan region. India has to react wherever her interests are jeopardized by China’s hostile attitude.

While India has become a victim to Pakistan sponsored terror, China has been trying to shield Pakistani terrorist organisations and non-state actors at all international fora including the UN Security Council. China is obstructing India from getting a permanent seat in the Security Council. China is in illegal possession of a vast area of Jammu and Kashmir, partly in Aksai Chin and partly in Raksam-Shaksgam areas close to Chilas clandestinely obtained by her from another illegal occupant namely Pakistan. The increasing military presence of China in Skardu in Pakistan-occupied Ladakh is a serious threat to the security of the crucial Line of Control (LoC) in the Baltal-Ladakh axis. Since Pakistan continues to use the occupied areas as the launching pad for armed infiltration by jihadis into Kashmir, India has to think seriously about how to deal with the situation. And lastly, India will be within her right to plan connectivity to Afghanistan via Gilgit and Wakhan corridor to open a link with the vast Afghan and Central Asian region. India has stakes in the expanded G-7 as she wants to grow her economy and bolster foreign investment. As the world’s largest democracy, India has bright opportunities of becoming one of the world’s largest economies.