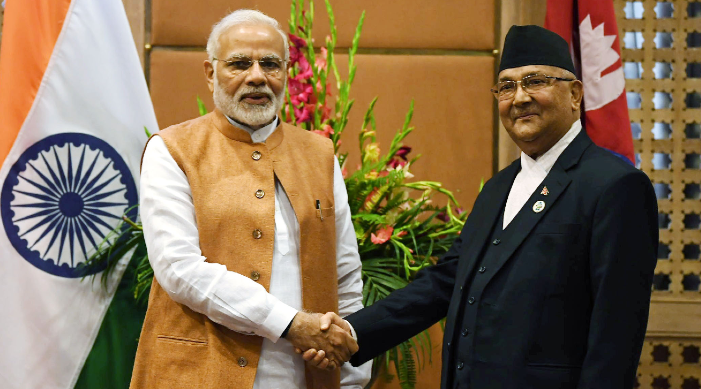 Nepal pushes for a constitutional amendment to adopt the controversial map

India is trying its best to see that Nepal on Tuesday doesn’t rush to amend its constitution to adopt the controversial new map which shows disputed territories of Lipulekh, Limpiyadhura and Kalapani within its borders.

India claims Kalapani falls under Uttarakhand’s Pithoragarh district, whereas Nepal claims it comes under the Dharchula district. Tension mounted after Defence Minister Rajnath Singh on May 8 inaugurated an 80 km long road from Dharchula to Lipulekh in order to make pilgrimage to Mansarovar easy.

On May 11, Nepal handed over a diplomatic note to Kathmandu-based Indian Ambassador Vinay Mohan Kwatra, asking India to hold virtual talks between foreign secretaries of the two countries if it is not possible to conduct physical meetings between them during the Covid-19 time. This proposal was not given credence.

On May 20, Nepal released a revised map of the country, triggering a sharp reaction from India.

On the same day, Ministry of External Affairs Spokesperson Anurag Srivastava in a statement said:“The Government of Nepal has released a revised official map of Nepal today that includes parts of Indian territory. This unilateral act is not based on historical facts and evidence. It is contrary to the bilateral understanding to resolve the outstanding boundary issues through diplomatic dialogue. Such artificial enlargement of territorial claims will not be accepted by India.”

In 1816 a treaty (Sugauli) was signed between British India and Nepal. The treaty states that west of the Kali River belongs to India, but nothing was mentioned about the source of this river which is Kalapani.

It was the British surveyors who showed that source of the river and its many tributaries in different places. Unfortunately, this digression is the reason for the territorial disputes between the two countries.

Also, there is another dispute with the Lipulekh pass atop Kalapani which is the mountain pass located at the Uttarakhand-Nepal border.

Previously, this pass was used as a route for the trade and pilgrimage but was closed because of the Indo-China war in 1962. Another place that Nepal claims to be there is Limpiyadhura, which is the northwestern part of the Lipulekh.

In 2000, the Prime Ministers of both countries had decided to resolve the border issue by making a clear study of Kalapani. But no initiative was taken to solve it. Again, in 2014 the two countries decided to solve the issue but it didn’t see significant progress on it.

Interestingly in 2015, when India and China agreed to boost the trade between the two countries through the Lipulekh Pass, Nepal didn’t raise any objection over it.