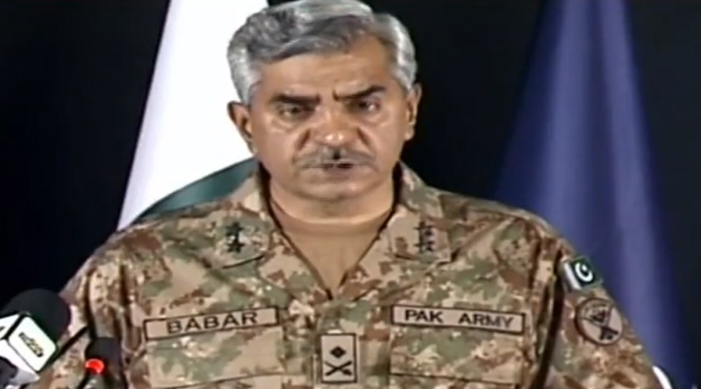 The recent interview given by Major General Babar Iftikhar, Director General (DG), Inter Services Public Relations (ISPR), the Military media wing of the Pakistan Armed Forces, on Geo Television’s Capital Talk, therefore comes as no surprise. But while there is no surprise in the lies that were spouted by Babar Iftikhar, the sheer brazenness with which they were stated makes one wonder how the world and especially the news anchor at Geo TV could be so gullible.

Let us take the denial by the DG, ISPR, of the existence of terrorist training camps in Pakistan with a focus on India. These camps harbour and train terrorists belonging to various groups like the Lashkar-e-Taiba (LeT), Hizbul Mujahideen (HuM), Jaish-e-Mohammed (JeM) and others. The HuM has been designated as a terrorist group by both the European Union and the United States, but remains a lawful organisation in Pakistan. Its head, Syed Mohammed Yusuf Shah, commonly known as Syed Salahudeen, also heads the United Jihad Council, a Pakistan-based conglomeration of jihadist militant groups sponsored by the ISI to annex Jammu and Kashmir to Pakistan. Salahuddeen operates freely in Pakistan, collects funds for jihad, threatens to train more Kashmiri suicide bombers, and vows to turn the Kashmir Valley “into a graveyard for Indian forces”.

Masood Azhar, the head of the JeM, was once described by the BBC as ‘the man who brought jihad to Britain’. Listed as an International terrorist by the United Nations Security Council on 1 May 2019, he continues to operate freely in Pakistan. Hafiz Saeed, the founder of the LeT is also based in Pakistan. His organisation was responsible for the 2001 Indian Parliament attack, the 2008 Mumbai attacks and the 2019 Pulwama attack on a security column of India’s Central Reserve Police Force (CRPF). With all these terrorist organisations based in Pakistan, the denial of their existence is in conformity with what Hussain Haqqani describes as the ‘playbook’ developed by Pakistan’s former President, General Pervez Musharraf, that is still being followed in Pakistan. This involves playing victim, promising action, banning some groups and ordering some arrests without changing the fundamentals of maintaining jihadis as instruments of proxy war in the region. Not much has changed since the Musharraf years. Indeed, it has only gone worse, with Pakistan continuing to wage a low cost proxy war against India, using jihadi terrorist groups which it trains, maintains and sends across the border.

In 21 November 2017, General Musharraf not only admitted the existence of these terrorist groups in Pakistan, but actually praised them. In an interview with Pakistan’s ARY News, openly came out in support of the LeT and the Jamaat-ud-Dawah (JuD), the political arm of the LeT, saying they were the biggest force against the Indian Army in Kashmir. He also stated that he had met the global terrorist, JuD chief Hafiz Saeed, and that he liked him. While the JuD and Let remain banned in Pakistan, they continue to operate freely, and are supported by Pakistan’s Inter Services Intelligence (ISI). That of course simply confirmed what was common knowledge in India, the US and elsewhere.


It is naive for Major General Iftikhar to state that infiltration is impossible in the highly militarised and well-guarded fences erected by India. While the Indian Army has made it extremely difficult for terrorists to infiltrate into India, Pakistani support for such infiltrating groups ensures that at least some of them get through. This support is given by the Pakistan army, which blatantly fires on to Indian defensive positions, using machine guns and mortar fire, to assist the infiltrators in getting through. This the prime reason for ceasefire violations by Pakistan, which obviously the Indian Army responds to in an appropriate manner. The modus operandi followed by the Pakistan military is that these infiltrators are brought forward from their training camps to the launch pads, just behind the Pakistani defences. Here, they are briefed, equipped, and given weapons, ammunition and explosives, kept for a day or two, at the post and then launched into India, with the Pakistan military giving them covering fire. Most do not succeed, but some do get through. To create chaos and confusion, the Pakistan military frequently also fires into the civilian population which has resulted in the death of many innocent civilians, including women and children, who live close to the border.

India’s response earlier to Pakistani aggression was lukewarm, which only emboldened them further. A change in the policy came about post 2014, when the BJP led NDA alliance came into power. Initial attempts by Prime Minister Modi to usher in peace were rebuffed by the Pakistan military, which responded with attacks on Indian troops. On 2 January 2016, terrorists attacked the Indian Air Force base at Pathankot, and killed a few security guards before being eliminated. Then on 18 September 2016, Pakistan sponsored terrorists carried out a suicide attack on a military base in Uri, in which 19 Indian soldiers lost their lives. While the four terrorists in this attack were eliminated it brought home to the Indian government the realisation that Pakistan would not cease its sponsorship of terror unless they were made to face the consequences of their action. That led to the first surgical strike by Indian forces across the line of control on the night of 28-29 September, in which Indian para commandos crossed the line of control and destroyed about half a dozen terrorist camps on a frontage of over 100 kms. In an unprecedented action, the Indian Army went public with the strike, as a warning to Pakistan that further aggression by them would not be countenanced.

Perhaps the message went home as for the next three years there were no major incidences of terrorist violence in J&K or even in any other part of India. Then on 14 February 2019, Pakistan sponsored terrorists struck again, this time using a suicide car bomber to target a convoy of the Indian Armed Police, which led to the loss of 40 personnel the Central Reserve Police Force (CRPF) in Pulwama district. India responded two weeks later with a surgical strike carried out by the IAF using its Mirage 2000 fighter aircraft, and destroyed the main JeM camp in Balakot, in Pakistan’s Khyber Pakhtunkhwa province, about a 100 odd kilometres from the border. This once again showed Indian intent to hit out at the sources of terror within Pakistan, if provoked to do so.

In this backdrop, in 2020, Pakistan once again thought of another major strike on Indian forces, using a suicide car-bomber. To preempt possible India reaction, the Pakistani premier, Mr Imran Khan Niazi, along with the Pakistan army chief, General Qamar Javed Bajwa, stated that India was planning false flag operations. This statement was repeated at least half a dozen times by the Pakistan premier, Mr Niazi, in various forums, which in a way indicated that pakistan was indeed planning another major strike. However, before the terror module could do so, the plot was uncovered on 28 May 2020 and a vehicle laden with explosives was recovered and the suicide bomber apprehended. Subsequently, the bomb maker and two of his accomplices were eliminated by the security forces. India is yet to reply to this provocation, and will perhaps do so at an appropriate time.

Pakistan is now desperately trying to peddle the narrative that terror attacks in the Union Territory (UT) of Jammu Kashmir are not emanating from Pakistan but by local modules who are fighting against the Indian state. This narrative has few takers as post the abrogation of the provisions of Article 370 of the Indian Constitution, which gave the state of J&K certain special powers, the situation in the Valley is normalising at a very fast rate. Incidences of violence in the UT have come down dramatically ever since and many deprived sections of the populace have finally been given equal rights as are available in the rest of the country. This especially pertains to the West Pakistan refugees of the partition era, the Valmikis and women, who faced discrimination earlier. The linkages which the Pakistani ISI had with the separatists in Kashmir, operating under the umbrella group Hurriyat has been broken which has largely led to a decline in terrorism and in normalcy gradually returning to the UT after more than three decades of violence. This obviously is not to the liking of the Pakistan military, which still seeks to create unrest in the valley, but would like to convince the world that what is happening in the UT is due to the local people fighting for their rights. This narrative has no takers in the UT, and indeed most of the world too. Many in Pakistan also feel that the time has come for Pakistan to desist from promoting terror in India, as evidently, the backlash falls on the common Pakistan people.

To hide its own dismal record in preserving human rights, Pakistan has now raised the bogey of muslims in India being discriminated against. This is laughable. Indian muslims in any sense can hardly be considered a minority as they constitute the second largest muslim bloc in the world. Muslims in India have occupied the apex position in India’s judiciary, military, administrative services and in India’s polity. Quite a few have also risen to the highest level in the Indian Republic, as President and Vice President of India. The muslim population in India has shown a significant increase since independence in percentage terms, in relation to the rest of the population. This is in stark comparison to the way that minorities have been treated in Pakistan, who remain denied of basic rights, and are persecuted both by the administration and the courts for their faith. The declining population of Pakistan’s minorities tells its own sorry tale as does the fact that not a single non-muslim in Pakistan is elevated to any position of authority in that country.

Pakistan seriously needs to reconsider the path it has taken in using terrorism as an instrument of its foreign policy. Telling blatant lies to ward off pressure being placed on it by the world community to stop terrorism emanating from its soil, as seen by the actions of the Financial Action Task Force (FATF), is evidence in itself of Pakistan’s sponsorship of terror. The fact that Pakistan sheltered Osama bin Laden and lied to the world about is proof enough of Pakistan’s perfidy.

The tragedy is not just that Pakistan continues to peddle lies, in pursuance of its foreign policy goals. It is the manner in which it has treated its own citizens which should cause the world to worry. It would be difficult to forget the genocide that Pakistan’s military committed on the people of Bangladesh, when that hapless country was still a part of Pakistan. Millions were slaughtered, women were raped, houses were looted and all this was done by the Pakistan army. In Pakistan today, the violence which the state perpetrates on the hapless Baloch population should serve as a reminder to the world that another genocide is in the offing in that hapless province. The Sindhis have been suppressed as have the Pashtuns in FATA and Khyber Pakhtunkhwa. The hapless people of occupied Gilgit Baltistan continue to face the heavy jackboot of the Pakistan army.

It is time for the people of Pakistan to introspect about their future. Peace, of course is a desirable outcome, but that is not the path which both the Pakistan military and its political establishments tread. The manner in which Pakistani society stands radicalised today gives little hope that the situation will improve. We need to thus deal with a situation where conflict and hostility is now the default condition. That is the best that can be hoped for.

The author is a retired Major General of the Indian Army. He is presently working as a director of the New Delhi based think tank, India Foundation.