No discussion on China during India-Australia virtual summit: MEA Secretary 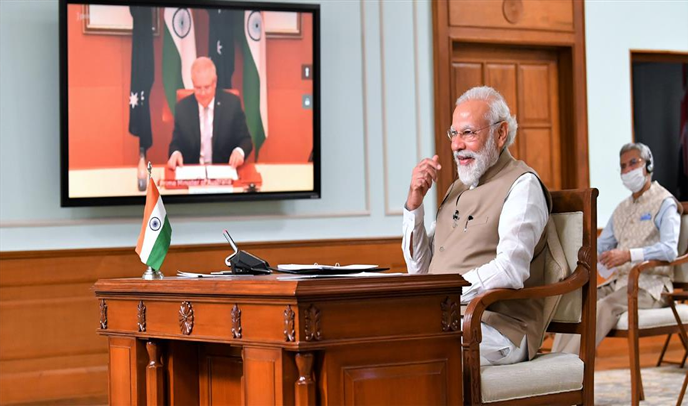 The first ever virtual summit between India and Australia lasted for 70 minutes instead of 40 minutes as fixed earlier.

Even though India and Australia held their first ever virtual summit on Thursday, the two countries didn’t discuss Indo-China standoff on the Line of Actual Control. This was revealed by Ministry of External Affairs’ Secretary (East) Vijay Thakur Singh in a question to Indiavsdisinformation.com

She categorically said there was no discussion on China during the virtual summit between Prime Minister Narendra Modi and Australian Prime Minister Scott Morrison. Nor were there any talks related to the possibility of Australia joining India-US-Japan Malabar naval exercise.

She also said that there was no discussion on Regional Comprehensive Economic Partnership during the summit. The RECP includes the 10 ASEAN countries, Australia, China, Japan, New Zealand and South Korea. India had refused to join the group, citing lack of protection for the country’s agricultural and other sectors.

The MEA Secretary also mentioned that the Australian Prime Minister during the summit which lasted for 70-minute, had termed the Indo-Australian relationship as a natural and comfortable one between two confident nations who are trusted partners.

She said the two countries’ relationship has been elevated to a comprehensive strategic partnership. During the summit, Prime Minister Narendra Modi and his Australian counterpart decided on a 'Shared Vision for Maritime Cooperation in the Indo-Pacific region' to harness the opportunities and face challenges together. They reiterated their nations' commitment to promoting peace, security, stability, and prosperity in the Indo-Pacific region.

Australia had expressed its strong support for India’s membership to the Nuclear Suppliers Group and also reiterated its backing for New Delhi’s candidacy for a permanent seat in a reformed UN Security Council.

Australia’s support was stated in the joint statement released after the virtual summit t between Prime Minister Narendra Modi and his Australian counterpart Scott Morrison.

The Australian Prime Minister was expected to visit India in January but was forced to cancel the trip because of the bushfires crisis in Australia.

The holding of the summit now, in the middle of the coronavirus pandemic, showed the importance the two leaders attached to bilateral ties, MEA Secretary Vijay Thakur Singh said.