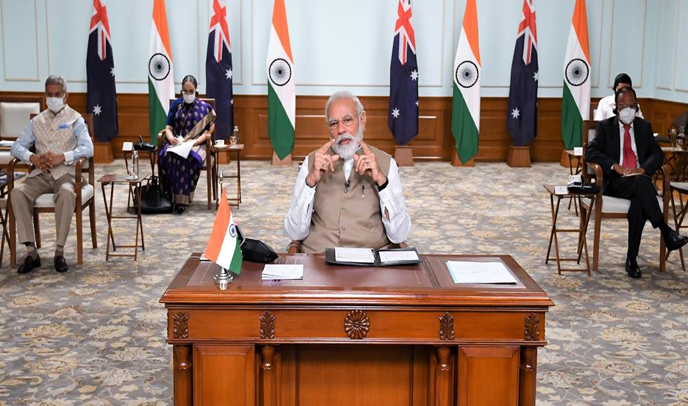 The two countries expressed their commitment to supporting a rules-based maritime order that is based on respect for sovereignty and international law.

Of these agreements, the two sides signed the landmark Mutual Logistics Support Agreement, allowing militaries of the two countries to use each other’s bases for repair and replenishment of supplies besides enhancing overall defence cooperation.

Australia is the fourth country with which India has signed this pact. It had earlier entered into similar agreement with the US, France and Singapore.

Besides, India and Australia signed MoUs in the areas of cyber and cyber-enabled critical technology, mining and minerals, military technology, vocational education and water resource management.

On the maritime cooperation, the two leaders decided to harness opportunities and meet challenges together as Comprehensive Strategic Partners.

In this context, they reiterated their commitment to promoting peace, security, stability, and prosperity in the Indo-Pacific region, which is vital for the world.

With a shared maritime geography and a deep and long-standing friendship, India and Australia are natural partners to work together towards realisation of this shared vision.

India and Australia are committed to supporting a rules-based maritime order that is based on respect for sovereignty and international law, particularly the United Nations Convention on the Law of the Sea (UNCLOS).

India and Australia have common concerns regarding the strategic, security and environmental challenges in the Indo-Pacific maritime domain. These include activities and actions in the maritime domain that are inconsistent with international law, particularly UNCLOS, including terrorism, piracy, drugs and arms smuggling, irregular migration, people smuggling, trafficking in human beings, poaching of marine species, narcotics trafficking and illegal, unreported and unregulated fishing.

The region’s environmental challenges, such as marine pollution, climate change, ocean acidification, shortage of potable water, loss of habitat due to storm surges and saline water intrusion, are also of shared concern.

India and Australia share a strong bilateral relationship, underpinned by ongoing cooperation across many areas of mutual interest. This cooperation includes the Australia-India Framework for Security Cooperation, regular dialogues involving Ministers responsible for foreign, defence and trade policy, and a broad range of senior officials meetings, such as the Defence Policy Talks, Australia-India Maritime Dialogue and Navy to Navy Staff Talks.

India and Australia will work together bilaterally, regionally and multilaterally, and in minilateral arrangements, to support regional architecture in line with their shared values and interests.

In this context, India and Australia will work closely to develop, with all interested partners, the Indo-Pacific Oceans Initiative (IPOI) announced by Prime Minister Narendra Modi at the 14th East Asia Summit on 4 November 2019 at Bangkok.

Through this Initiative, they will endeavour to improve the management of the shared oceanic domains, including in key areas of cooperation such as preserving the maritime ecology and reducing the impact of marine pollution (especially plastics); maritime security; sustainable use of marine resources; capacity building and resource sharing; disaster risk reduction and management; science, technology and academic cooperation; and trade, connectivity and maritime transport.

Recognising that India and Australia have a shared interest in promoting maritime security and safety, they will deepen navy-to-navy cooperation and strengthen maritime domain awareness in the Indo-Pacific region through enhanced exchange of information. Both countries will also work to enhance civil maritime cooperation between law enforcement agencies and coast guard cooperation.

Given the importance they attach to ensuring sustainable use of living and non-living marine resources in the Indo-Pacific region, in accordance with international law, they commit to protecting the Indo-Pacific marine environment and reducing the impact of marine pollution, particularly plastics, and climate change.

India and Australia will work jointly towards implementation of an Action Plan with specific measures to advance their bilateral maritime cooperation in line with this Vision.