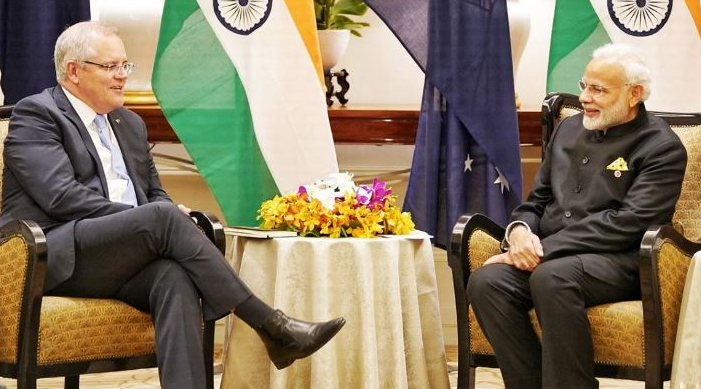 Australia is home to a 700,000-strong Indian diaspora and there are about 106,000 Indian students in Australia

The first India-Australia virtual leaders’ summit on June 4 is expected to build on growing defence ties between the two sides and shared approach to a free, open and inclusive Indo-Pacific, people familiar with development said on Tuesday.

This will be Prime Minister Narendra Modi’s first virtual bilateral summit, while Australia has held such a summit with Singapore in March. Since Australian Prime Minister Scott Morrison’s visit to India was in the pipeline (first during January 13-16 and later in May), the two leaders decided to continue their engagement through a virtual meeting.

Several agreements, including one on mutual sharing of military logistics facilities, are expected to be signed during the summit on June 4, the people cited above said on condition of anonymity.

Australia has huge deposits of minerals, including rare earth metals, and the two sides have been working on cooperation in critical and strategic minerals, the people said.

The virtual summit will provide an opportunity to the two sides to review the broad framework of the relationship and to discuss their responses to the Covid-19 pandemic.

“Due to better understanding of India’s strength and future role, Australia, in its white paper on foreign policy of 2017, recognised India as the pre-eminent maritime power among Indian Ocean countries and a front-rank partner of Australia,” said one of the people.

“India and Australia have developed an understanding of each other’s perspectives on regional and global issues. We have a shared approach to a free, open, inclusive, and prosperous Indo-Pacific. This has led to convergence of mutual interest in many areas,” the person added.

At the plurilateral level, Australia has backed India’s global initiatives such as the International Solar Alliance and Coalition for Disaster Resilient Infrastructure. Australia also backs India’s membership of an expanded UN Security Council and supported the country’s membership of the Australia Group and Wassenaar Arrangement.

“Australia has also been supportive of India’s position on cross-border terrorism and on asking Pakistan to take meaningful action against terrorist groups operating from its soil. Australia co-sponsored the UN Security Council resolution to declare Jaish-e-Mohammed chief Masood Azhar a global terrorist,” the person said.

Bilateral trade was worth $20.92 billion during 2018-19, including India exports of goods and services worth $5.17 billion. Australia’s cumulative investment in India is about $10.74 billion while Indian investments in Australia totalled $10.45 billion. The Australian Pension Fund has invested $1 billion in India’s National Investment and Infrastructure Fund.

Australia is home to a 700,000-strong Indian diaspora and there are about 106,000 Indian students in Australia. Under Vande Bharat Mission, 1,560 Indian nationals were repatriated from Australia in seven flights in May. The flights also evacuated 1,096 Australians.