“India will definitely get growth back”: PM Modi to industry leaders 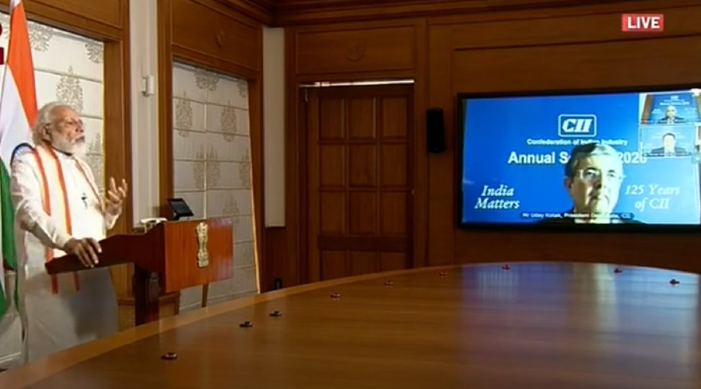 India would get its economic growth back and the process had started with “Unlock 1”, Prime Minister Narendra Modi said today addressing a gathering of industry leaders.

“Yes, we will definitely get our growth back,” he emphasised during an online speech to mark 125 years of the Confederation of Indian Industry (CII).

Expressing confidence in India’s abilities, PM Modi said that strengthening the economy was one of the government’s top priorities alongside fighting coronavirus.

"I have faith in India's talent and innovation, its hard work and dedication, its entrepreneurs and workforce," said PM Modi

The government had to take tough steps to fight coronavirus and control its spread to keep the people safe and also take steps to care of the economy, the Prime Minister pointed out in his speech on the topic “Getting growth back”..

Coronavirus had slowed down the country but the most important thing to look at today was that India had left behind the lockdown phase and entered Unlock 1, PM Modi said. A major part of the industry had already reopened as part of Unlock 1.

“Getting growth back is not that difficult,” said the Prime Minister, adding that the Indian industry now had a clear path, that of a self-reliant India.

Pointing out that a self-reliant India will be fully integrated with the world economy, PM Modi said the government wanted to invest in a robust local supply chain that would strengthen the country’s participation in the global supply chain.

Explaining the road ahead, he said "Intent, inclusion, investment, infrastructure and innovation" were needed to make India self-reliant.

Reforms were not random or scattered decisions for the government; it was a “systemic, planned, integrated, inter-connected and futuristic process,” PM Modi explained. The government was committed to taking these reforms to its logical conclusion, he pointed out.

The government had introduced reforms in the agricultural and labour sectors, he noted.

Pointing out that non-strategic sectors where private players were not allowed earlier had been opened up, the Prime Minister said they could now also invest in strategic sectors like space or atomic energy.

There were opportunities in mining, energy, research and technology, PM Modi said.