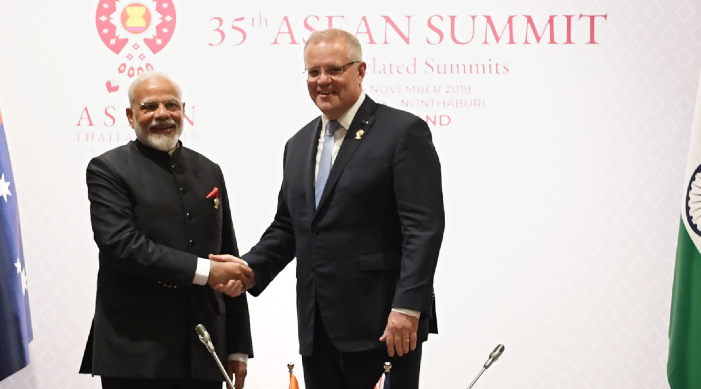 Prime Minister Morrison will be holding a “virtual summit” with his Indian counterpart Narendra Modi on Thursday, after delaying his visit to India due to the bushfire crisis.

Australian Prime Minister Morrison said he was looking forward to discussing the countries' responses to the COVID-19 pandemic.

“Prime Minister Modi and I will also discuss new opportunities in defence, trade, maritime safety and security, science and technology, and education,” Morrison said in a statement on Sunday.

"As like-minded democracies and natural strategic partners, Australia and India are in full agreement that our strong bilateral relationship is key to a more open, prosperous and inclusive Indo-Pacific."

Morrison was scheduled to spend a week in January to deliver a keynote address at the Raisina Dialogue — India's high-profile security forum — before Australia's record-breaking bushfires.

Yesterday, Morrison tweeted a photo of him holding samosas, adding that it's “a pity” his meeting with Modi will have to be via videolink.

“Sunday ScoMosas with mango chutney, all made from scratch — including the chutney!" he tweeted.

“A pity my meeting with @narendramodi this week is by videolink. They're vegetarian, I would have liked to share them with him.”

"Once we achieve a decisive victory against COVID-19, we will enjoy the Samosas together. Looking forward to our video meet on the 4th."

There's a common cliche that Australia and India only have three Cs in common: cricket, curry and the Commonwealth.

And while Morrison including using cooking the dish as an analogy for the Delhi-Canberra relationship at an event in 2018, there is much more to relations between the two countries.

Fresh off the back of his own surprise re-election, Morrison was one of the first world leaders to congratulate Modi on his return to power.