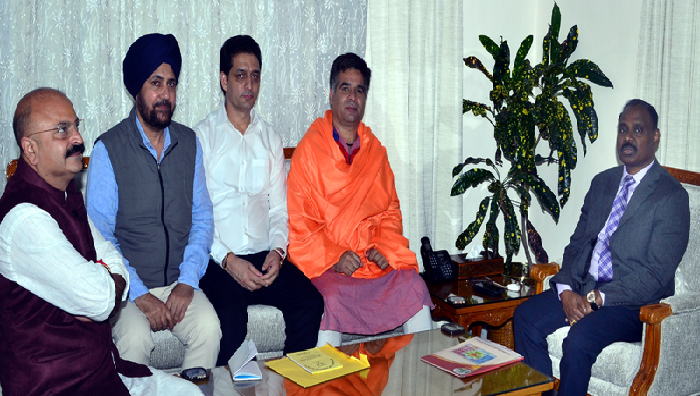 Lieutenant Governor, Girish Chandra Murmu has directed for rolling out the mechanism for the restructuring of Tourism Development Authorities across the Union Territory of Jammu and Kashmir.

The Lt. Governor passed these directions during a meeting he chaired to review the functioning of Planning, Development and Monitoring Department here at the Civil Secretariat.

The Lt. Governor observed that there is a pressing need to revamp the tourism sector and directed the officers to assess the functioning of the Tourism Development Authorities in J&K and take necessary measures for restructuring the same.

Taking serious note of the delay in some of the Health Infrastructure projects, the Lt. Governor directed for fixing responsibility for the inordinate delays and initiating strict action against the erring officers. He further asked the officers to expedite the remaining projects under PMDP with clear timelines for their timely completion.

The Lt. Governor asked the officers to coordinate with Government of India regarding funds and submit the proposal to the concerned quarters for additional funds, if required, to complete the development projects in time.

Pertinently, Prime Minister’s Development Package (PMDP) was announced for Jammu & Kashmir and Ladakh in November 2015 with a total outlay of Rs 80,068 crore (800.68 billion) with Rs 58,625 crore (586.25 billion) allocated for Jammu and Kashmir for the completion of 54 major projects under the package, out of which 35 projects were to be executed by UT Administration and agencies while 19 projects were taken up by the Central Government.

It was further informed that a total of 15 projects under PMDP in J&K stand completed including projects like Chenani-Nashri Tunnel, Batote- Kishtwar-Sinthantop road, Jammu-Udhampur National Highway stretch. The meeting was also briefed that the upgradation work of MA Stadium is nearing its completion and the stadium is likely to be thrown open for the games within the next few days.