India will continue to partner with Arab world for peace, stability: TS Tirumurti 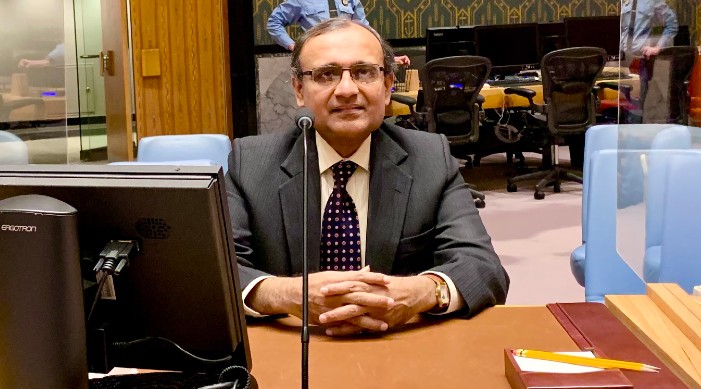 India and the Arab world share ties that are rooted in history and the developments in the region continue to have a profound impact globally, said India’s Permanent Representative to the United Nations TS Tirumurti, adding that India will continue to partner with the Arab countries to achieve peace, stability, and prosperity.

Speaking at the UN Security Council briefing on 'Cooperation between the United Nations and regional and sub-regional organizations: League of Arab States’, Tirumurti said, “The Arab world has been the cradle of civilization and the birthplace of three major religions. Given its strategic location, developments in the Arab world have shaped our common history and continue to have a profound impact globally. The challenges that the region is confronting today and how we address them collectively will have a bearing on our collective future.”

Both India and the Arab world share a civilizational relationship and New Delhi's interaction with the region encompasses every aspect of human endeavor, said India’s Permanent Representative to the UN.

"India and the Arab world share a civilizational relationship and our interaction with the region encompasses every aspect of human endeavor-- from agriculture to hi-tech, from clean energy to counterterrorism, and from education to trade and commerce," Tirumurti added.

UNSC Briefing on cooperation between UN and @arableague_gs


Reiterating that peace and stability in West Asia and North Africa are of vital interest for India, the UN envoy said, “Arab countries are host to around nine million Indians, the largest expat community in the Arab world. Their contributions to the economies of host countries and nation-building efforts are greatly appreciated by both the people and the governments of these countries. Indians from the Arab world remit around $48 billion to India annually.”

He further expressed gratitude for Arab countries for their cooperation for Vande Bharat Mission during Covid-19 imposed travel restrictions.

"I would like to take this opportunity to express the Government of India's gratitude for the assistance extended by Arab countries for ‘Vande Bharat Mission’, the largest repatriation exercise undertaken by India and probably anywhere in the world during Covid-19 imposed travel restrictions."

"Our excellent bilateral relations with the Arab world are also reflected in our institutional engagement under the framework of the Arab-India Cooperation Forum. The Third Senior Officials' Meeting (SOM) of this Forum took place virtually earlier this month, and we look forward to hosting the next meeting in India," he added.

On the issues affecting the Arab world, the Indian envoy said, "Attempts to delegitimize government and to impose external solutions have moved them away from negotiations, made them skeptical of the political process. Such an approach embolden the regional players to support respective sides, both politically and militarily. The proxies, propped by their mentors, also aspire for a political role without much support on the ground."

He said the presence of foreign terrorists, who become enablers of attacks carried out by terror groups such as al-Qaeda and ISIS, in countries facing conflicts poses serious challenges and undermines global efforts to counter-terrorism.

"The presence of foreign terrorist fighters in countries facing conflicts is posing serious challenges to ongoing international efforts. These fighters have become enablers of attacks carried out by terror groups such as Al Qaeda and ISIS. They are also radicalizing the youth," Tirumurti said.

Speaking on the recent developments in the Arab States, he said, "Recent months have witnessed positive developments, including the signing of the Abraham Accords. India has always supported the Palestinian issue and peace and stability in West Asia which is our extended neighborhood."

"We also continue to maintain our traditional support for the Palestinian cause. A two-state solution and lasting peace can be achieved only through direct negotiations between the two parties on all final status issues, taking into account the legitimate aspirations of Palestinians for Statehood and Israel's security concerns."

In conclusion, closer and meaningful cooperation between the UN and the League of Arab States will benefit the region immensely, he added.

"India will continue to partner with the Arab countries in their efforts to achieve peace, stability, and prosperity and will work together with the League of Arab States in their pursuit of regional peace and security, in combating terrorism and other challenges, and in promoting tolerance and pluralistic traditions," he said.