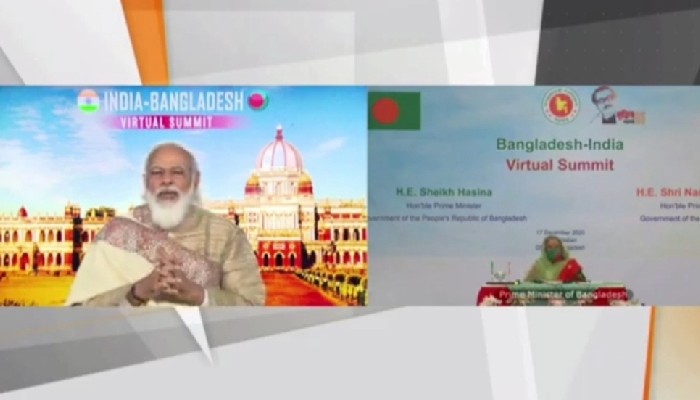 With this, five of the six pre-1965 railway links between the two countries stand restored

During the meeting, PM Modi and his Bangladeshi counterpart committed to further take forward the ongoing bilateral connectivity measures and welcomed the recent initiatives in the field of connectivity via air, road, water, and rail.

The two leaders noted that this rail link will further strengthen trade and people to people ties between the two sides.

“The two Prime Ministers noted with satisfaction the continued progress made towards the restoration of pre-1965 railway linkages between both nations. It was decided to operationalize the train as and when the COVID situation improves,” the joint statement read.

According to the statement, the two leaders welcomed the recent initiatives including the signing of the second addendum to the Protocol on Inland Water Transit and Trade (PIWTT), trial run of trans-shipment of Indian goods from Kolkata to Agartala via Chattogram, and operationalization of Sonamura-Daudkandi Protocol route under the PIWTT.

Both the leaders agreed to expeditiously operationalize trans-shipment of Indian goods through Chattogram and Mongla Ports, according to the joint statement.

Further, to facilitate better connectivity and simplify the movement of passengers and goods between both the countries, both leaders agreed to an early operationalization of the BBIN Motor Vehicles Agreement through the expeditious signing of the Enabling Memorandum of Understanding (MoU) for Bangladesh, India, and Nepal to commence the movement of goods and passengers, with provision for Bhutan to join at a later date.

The BBIN MVA is expected to be a game-changer for neighborhood cooperation. For the first time, these countries have decided to exchange their traffic rights and provide transit to cargo and passenger vehicles within and across international borders.

During the meeting, PM Hasina expressed keen interest in the ongoing India Myanmar Thailand trilateral highway project and sought the support of India for enabling Bangladesh to connect with this project to enhance connectivity between the regions of South and Southeast Asia.

In the same spirit, the Indian side requested Bangladesh to allow connectivity from West Bengal (Hilli) to Meghalaya (Mahendraganj) via Bangladesh.

During the meeting, PM Modi reiterated India’s request to the Government of Bangladesh of having at least one Land Port with a minimal negative list between each neighboring states of India and Bangladesh, beginning with Agartala-Akhaura.

To this, the Bangladesh side proposed that Bangladeshi trucks avail of the Feni Bridge, once completed, for transportation of goods from Chattogram port to the North East of India.

Both sides noted with satisfaction the commencement of a temporary Air Travel Bubble between the two sides to facilitate the urgent requirements of travelers on both sides during the COVID-19 pandemic. The Bangladesh side also requested the Indian side to resume regular travel through land ports at the earliest.

Acknowledging the vibrant development partnership between the two countries, both sides stressed on active operationalization of the recently-constituted High-Level Monitoring Committee headed by Secretary, Economic Relations Division from Bangladesh and the High Commissioner of India in Dhaka to regularly review the progress of the Line of Control (LOC) Projects for their early completion.