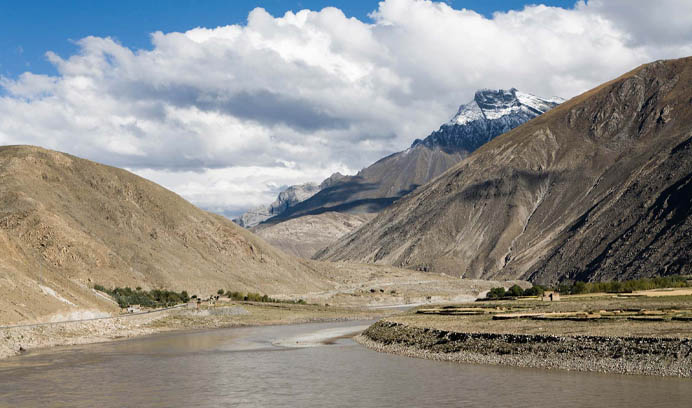 File photo of the Brahmaputra river.

In the wake of China’s announcement of building a super dam on the Yarlung Tsangpo river, called the Brahmaputra in India, to generate hydropower, the Ministry of External Affairs on Thursday said that New Delhi is “carefully monitoring all developments” related to the trans-border river.

"As a lower riparian state with considerable established user rights to water of the trans-border river, we have consistently conveyed our views and the concern to the Chinese authorities. We have urged them to ensure that interests of the downstream states are not harmed by any activity in upstream areas,” MEA spokesperson Anurag Srivastava said while flagging India’s worries over China’s planned hydropower project on the Brahmaputra river.

The Chinese Foreign Ministry during a briefing said China has a legitimate right to develop hydropower on Yarlung Zangbo (Yarlung Tsangpo in the Tibetan language) river. China is building the dam in the Medog country of the Tibetan Autonomous Region.

“It is China's legitimate right to carry out hydropower station development in the lower reaches of the Yarlung Zangbo River. China has always held a responsible attitude towards the development and utilization of cross-border rivers and adopted the policy of simultaneously developing and protecting cross-border rivers," China’s Foreign Ministry spokesperson Hua Chunying said on Thursday in response to a media question.

Several experts have, however, maintained that by building a huge dam on the Yarlung Tsangpo river, China wants to aggravate the water situation in the Brahmaputra river basin, consisting of the Ganges and the Brahmaputra.

As per data, more than 600 million people live in the Brahmaputra basin, 80 percent of which are farmers and need the water for their crops and animals. There are fears that China may use water resources as a weapon to target India and its interests.

The MEA spokesperson said the Chinese side has conveyed to India on several occasions that “they are only undertaking run-of-the river hydropower projects which don’t involve diversion of water of the Brahmaputra river.”

Yet, widespread concern about China’s intention persists as it is also constructing with frenzy the 720 MW Karot and 1124 MW Kohala hydro projects in Pakistan-occupied Kashmir under the $60 billion China-Pakistan Economic Corridor. Both Karot and Kohala are located on the Jhelum River, a tributary of the Indus river.

India is the only country that falls in upper, middle and lower riparian. In fact, given the country’s geographical spread in South Asia, it has a direct stake in all the important river basins in the region. It could be potentially affected by water-related actions of upstream countries like China and constricted by the treaty with downstream countries like Pakistan and Bangladesh on the Indus and the Ganges.

“No country in Asia is more vulnerable to China’s reengineering of trans-boundary flows than India because it alone receives-directly or via rivers that flow in through Nepal—nearly half of all river waters that leave Chinese-controlled territory,” strategic affairs commentator Brahma Chellaney said in a write-up in an English daily.

However, China terms such concerns of Indian experts who have repeatedly maintained that China could reengineer water resources to play against India and its livelihood, as erroneous.

“India has always been overly sensitive to China’s actions in the region, and India tends to make threat-oriented, politicized interpretations. But these energy projects can benefit the entire regional economy, if properly coordinated,” China’s state controlled Global Times maintained in its editorial on November 30.