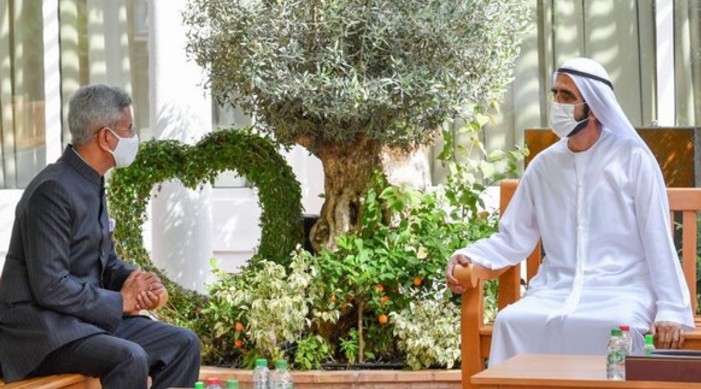 EAM S Jaishankar was in Dubai was part of his six-day visit to Bahrain, Seychelles and the UAE to further consolidate bilateral ties

With the economies opening up and trade resuming, India is on a mission to bolster its existing relationship with several countries and take them to new heights in the post-COVID era. After Bahrain and Seychelles, External Affairs Minister S Jaishankar was in Dubai on Sunday to discuss issues of bilateral interests.

The EAM met with Vice President, Prime Minister and Ruler of Dubai, Sheikh Mohammed bin Rashid Al Maktoum and discussed prospects of the economic relationship in the post-COVID era.

Taking to twitter, he wrote, “Underlined that India had been a reliable partner in all respects during this difficult period. Discussed prospects for our economic cooperation in the post- COVID era.”

According to various reports, both sides discussed ways to restore and stimulate the economies of the two countries and increase trade. S Jaishankar commended the UAE for its measures adopted to combat the pandemic making him the leading countries which have contained the virus.

The EAM also appreciated the UAE for harnessing financial and human resources in other countries and providing them essential medical supplies to help them in need.

S Jaishankar also shared with him a personal message from Prime Minister Narendra Modi. The EAM wrote, “Called on HH Sheikh Mohammed bin Rashid Al Maktoum, VP, PM of UAE and the Ruler of Dubai. Handed over a personal communication from Prime Minister @narendramodi. Thanked him for taking care of the Indian community.”


Called on HH Sheikh Mohammed bin Rashid Al Maktoum, VP & PM of UAE and the Ruler of Dubai. Handed over a personal communication from Prime Minister @narendramodi. Thanked him for taking care of the Indian community. pic.twitter.com/Eo6NVseI5f


In his message PM Modi had thanked PM Mohammed bin Rashid and the Government of the UAE for its efforts in reducing the spread of the virus by taking the necessary procedures. PM Modi thanked him for protecting the Indian community and offered its members medical treatment which led to a significant decrease in infections among Indians and other communities.

On the other hand, UAE PM Sheikh Mohammed bin Rashid stressed that the UAE is keen to combat and contain COVID-19 while also restricting its adverse impact on sectors like tourism, trade, commerce and health. The UAE is also looking to gradually return to normalcy.

S Jaishankar also addressed the Indian community of Dubai & Northern Emirates through a virtual meet and expressed his appreciation to the community for the support to fellow Indians during the pandemic, the Indian Embassy in UAE wrote on twitter.


Hon'ble External Affairs Minister @DrSJaishankar addressed the Indian community of Dubai & Northern Emirates through a virtual meet on November 29 & expressed his appreciation to the community for the support to fellow Indians during the pandemic.@IndembAbuDhabi @MEAIndia pic.twitter.com/CDvVvb7fZT


His visit to Dubai was a part of his six-day visit to Bahrain, Seychelles and the UAE. As part of the second leg of his visit, he visited Abu Dhabi on a two-day visit between November 25-26 where he held talks with the Crown Prince of Abu Dhabi Sheikh Mohamed bin Zayed Al Nahyan and his counterpart Sheikh Abdullah bin Zayed Al Nahyan.

During his visit to Bahrain between November 24-25, he met with his counterpart Dr Abdullatif bin Rashid Al Zayani and discussed historical ties and cooperation in diverse sectors between the two countries.

Similarly, during his two-day visit to Seychelles which concluded on November 28, he met with the newly elected President of Seychelles, Wavel Ramkalawan and his counterpart, Foreign Affairs Minister and Tourism of Seychelles, Sylvestre Radegonde. Conveying Prime Minister Narendra Modi’s personal message to him, EAM Jaishankar invited President Ramkalawan to visit India in 2021.

Earlier in the year, during a meeting held virtually, dignitaries from the UAE and India had acknowledged that both nations can be significant partners with each other in their fight against COVID-19.