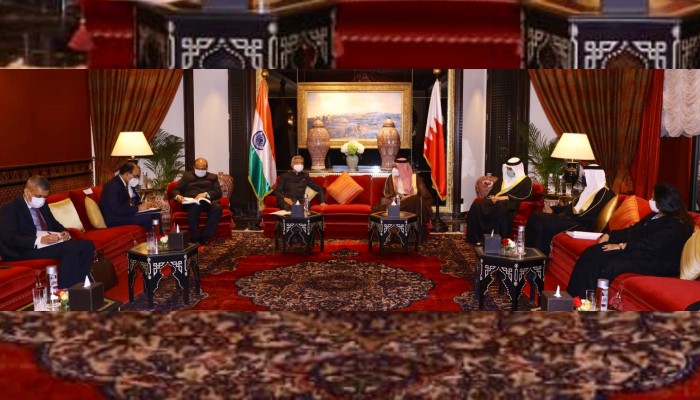 India and Bahrain share very warm and historic relationship between them

India and Bahrain have agreed to strengthen their bilateral ties in the areas of defence, maritime security, space technology, trade and investment, infrastructure, IT, FinTech, health, hydrocarbon and renewable energy.

During his calls on the Bahrain leadership, he personally conveyed, on behalf of the Government and people of India, sincere condolences on the sad demise of Prince Khalifa bin Salman Al Khalifa, former Prime Minister of the Kingdom of Bahrain.

He recalled the contribution of the late Prime Minister in strengthening India-Bahrain relations and for the welfare of the Indian community in Bahrain.

The EAM had also held talks with Abdullatif bin Rashid Al Zayani, Foreign Minister of the Kingdom of Bahrain.

While holding delegation level talks with Bahrain’s Foreign Minister, S Jaishankar discussed the entire gamut of bilateral issues as well as regional and global issues of mutual interest including cooperation and coordination in dealing with post-Covid-19 challenges.

During the talks, he renewed an invitation to Bahrain’s Foreign Minister for visiting India for the 3rd India-Bahrain High Joint Commission meeting in the next few months.

EAM Jaishankar thanked the leadership of Bahrain for hosting more than 300,000 strong Indian community in Bahrain and for taking exceptional care of the community during the Covid-19 pandemic.

Bahrain’s leadership appreciated the contribution of the Indian community to the development of Bahrain and the assistance provided by India during the Covid-19 pandemic through supply of medicines, medical equipment and medical professionals. Both sides affirmed to further strengthen their Covid-19-related cooperation.

They also expressed satisfaction on operationalisation of the Air Bubble arrangement between the two countries.

During the visit, the EAM also interacted with the leaders of the Indian community in Bahrain in virtual mode. He paid a visit to the 200 years old Shreenathji (Shree Krishna) temple in Manama.

The temple and the Little India around it stand as a testimony for the enduring India-Bahrain friendship. He also visited the National Museum of Bahrain.