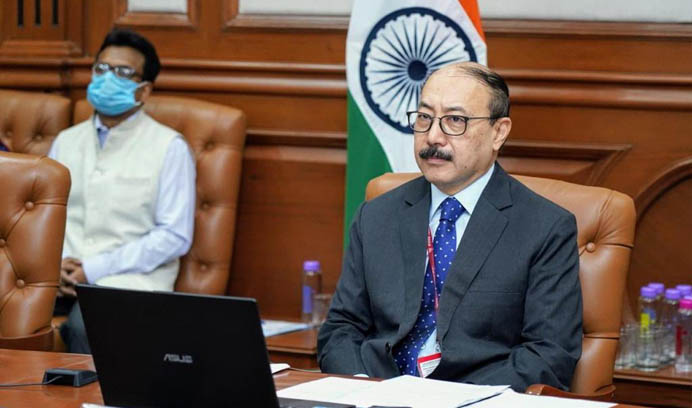 Foreign Secretary Harsh Vardhan Shringla will land in Kathmandu on Thursday on his maiden visit to Nepal during which he will hold talks with his counterpart Bharat Raj Paudyal and other dignitaries and discuss wide ranging issues of bilateral interests.

“It will help enhance the level of our engagement, and allow a comprehensive review of our ties after a gap of some time. We are keen to take forward this momentum, and make progress on the diverse sectors that encompass our bilateral relations,” the government sources said.

Earlier this month, Indian Army Chief Gen M M Naravane had made an official visit to Nepal during which he had held talks with the Himalayan country’s top leadership and discussed bilateral relations.

During the visit, the Army Chief had called on Prime Minister K P Sharma Oli, who is also the country Defence Minister. The Indian Army Chief’s three-day visit to Nepal was largely aimed at resetting bilateral ties that came under severe strain following a bitter border row between the two countries.

India’s ties with Nepal are extensive and deep; notwithstanding the map issue, and the Covid-19 pandemic triggered restrictions, interaction has been ongoing in almost all sectors.

For example, in August, the Indian Ambassador to Nepal and the former Nepal Foreign Secretary met under the Oversight Mechanism to review the vast portfolio of development projects.

The ground breaking ceremony for ICP Nepalgunj was held in November. The JWG on Power is to meet shortly, as is the Commerce Secretary level dialogue.

“We have ensured uninterrupted flow of goods across the land border despite Covid restrictions. We have also provided Covid related assistance worth around Rs. 15 crore and organized repatriation of Nepalese nationals from different countries. An online exam for our scholarship scheme was held this year to overcome Covid-19 restrictions,” sources said.

The Joint Commission at the Foreign Ministers level has met three times since 2014.

This has been matched by a discernible increase in our overall engagement with Nepal. Today, the two countries have nearly 40 bilateral mechanisms that have been meeting regularly.

A large number of development projects have been completed in recent years, such as the Emergency and Trauma Centre in Kathmandu, the Integrated Check Posts in Birgunj and Biratnagar, the Pashupati Dharamshala, two power transmission lines, the first cross border petroleum products pipeline and others.

India has extended Lines of Credit worth US$ 1.3 billion to Nepal for humanitarian assistance and infrastructure development.

For post-earthquake reconstruction efforts, India has extended grants of US$ 250 million and US$ 750 million as LOC, focussing on housing, education, health and cultural heritage restoration.

More than 46000 houses have been rebuilt. Construction of 70 schools and 150 health facilities across 12 districts of Nepal is underway.

Around 87 High Impact Community Development (HICDP) is under implementation across all the 77 districts of Nepal, while around 100 HICDP projects have already been completed.

Since 2014, when Narendra Modi made the first prime ministerial visit to Nepal in 17 years, the two countries have seen renewed momentum in their relations. In fact, since taking office in 2014, Prime Minister Modi has made four visits to the Himalayan country (two each in 2014 and 2018).

From Nepal’s side, President Bidya Devi Bhandari visited India in April 2017 while Prime Ministers of the country visited India seven times since 2014, most recently in May 2019.