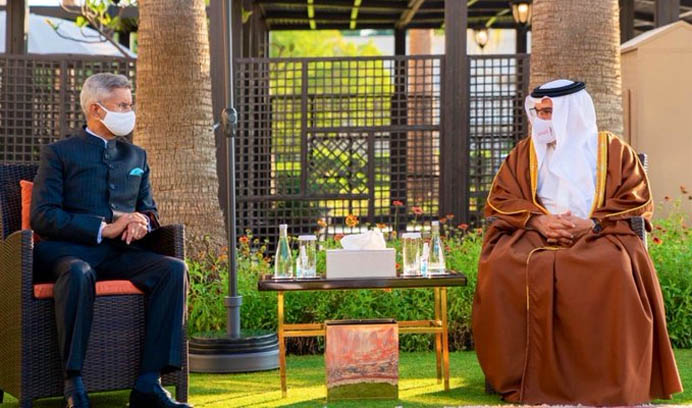 Tweeting about it, EAM Jaishankar wrote: “Called on DPM HH Shaikh Ali bin Khalifa Al Khalifa. Conveyed to him and his family our sincere condolences on the passing away of his father HRH Prince Khalifa bin Salman Al Khalifa.”

On November 11, Prince Salman Al Khalifa died at the age of 84, as per the state media. He was one of the longest-serving prime ministers in the world.

Earlier in the day, EAM Jaishankar had a virtual interaction with the members of the Indian diaspora in the Gulf country via video conference and thanked them for “keeping India’s flag flying high.”

“Glad to interact virtually, with members of the Indian community in Bahrain. Thank them for keeping India’s flag flying high. Appreciate their valuable contribution to the strengthening of our bilateral ties,” Jaishankar tweeted.

The EAM had also visited the centuries-old Lord Sri Krishna temple at Manama, the Bahrain capital.

During the meeting, the EAM also thanked Bahrain for taking special care of the Indian diaspora in the Gulf country during the Covid-19 pandemic.