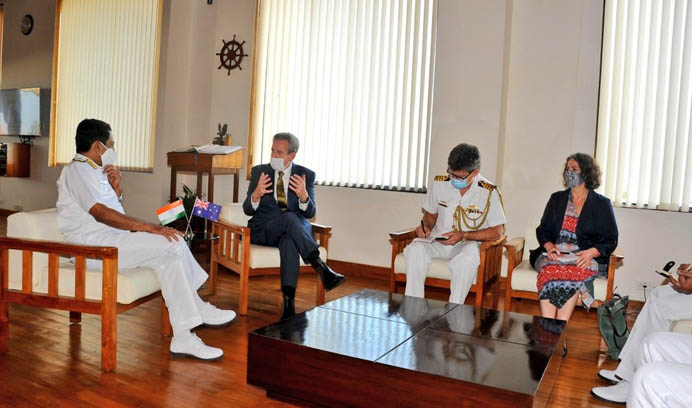 The visit came days after the recently-concluded Quad exercise MALABAR 2020, held in the Bay of Bengal and the Arabian Sea, in which India, Australia, Japan and the U.S. participated

He was accompanied by Consul General, Consulate of Australia, Mumbai Sarah Roberts and a three-member delegation during the meeting which discussed issues of common interest like bilateral cooperation in defence and security, strategic partnership and shared maritime interests as Indian Ocean littoral states, the Ministry of Defence said in a statement.

The High Commissioner's visit was significant as it came days after the recently-concluded Quad exercise MALABAR 2020 in which India, Australia, Japan and the U.S. participated. Royal Australian Navy frigate HMAS Ballarat represented the country in both the phases of Malabar 20 held in the Bay of Bengal and the Arabian Sea. The frigate had spent a few days at the Goa port as part of its operational turnaround.

During his visit, the Australian High Commissioner also visited the Aircraft Carrier Dock at the Western Naval Command.

"The current visit by the High Commissioner is in accordance with the good relations enjoyed by both the Commonwealth nations and is expected to further strengthen the existing bonds between both the navies," the statement said.

Australia participated in the Malabar Exercise after a gap of 13 years. After the formal announcement that it would be joining this year's naval exercise, Australian Foreign Affairs Minister Marise Payne had said this was another important step in the country's deepening relationship with India.

“This builds on the Comprehensive Strategic Partnership, to which Prime Minister Morrison and Prime Minister Modi agreed on 4 June 2020, and which I progressed with my counterpart, Minister of External Affairs Jaishankar, this month when we met in Tokyo,” she said in a statement issued on October 19.