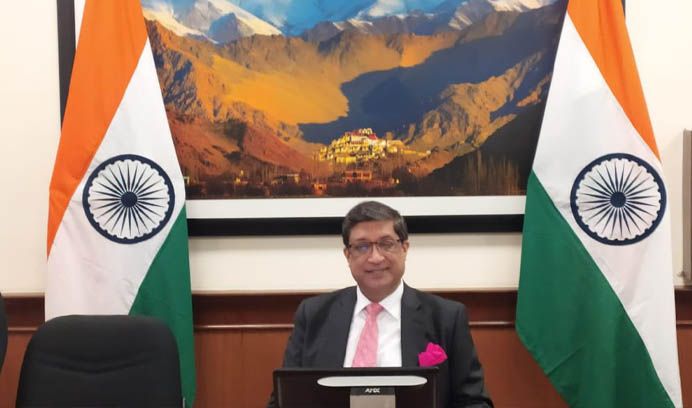 "India-Israel relations are steeped in history, a chequered one, as we know,” said Sanjay Bhattacharya

While addressing the 13th India-Israel Forum on Monday, Secretary (CPV and OIA) in the Ministry of External Affairs, Sanjay Bhattacharya termed West Asia as India’s extended neighbour with which “we saw unprecedented positive momentum in our ties with the countries in this region, in recent decades”.

He said India has several strategic partnerships with the countries of the region, including Israel. “We call West Asia and the Gulf and a few elements of our special and unique relations with Israel,” the senior MEA official maintained.

“The region is central to our economic and security interests and important for our role in a globalized world and reformed multilateralism. Our shared vision hopes for regional peace and stability, economic growth and engagement consistent with development priorities, collaboration in resources and technologies and efforts for a reformed and responsible multilateral system. These form the important pillars of a future-oriented strategic engagement,” the MEA Secretary said

The MEA official added India “welcomed the recent rapprochement between Arab states and Israel leading to the normalization of relations. This could improve prospects for a brighter future for the region. The ideal future rests on the realization of the legitimate aspirations of the people. We have often said that direct negotiations between the parties can provide solutions for peaceful and secure co-existence between the two sides and also provide peace and prosperity to the citizens of two States, living side by side.”

Maintaining that India-Israel relations are steeped in history, a chequered one, he said, “The steep trajectory over almost three decades, since we established full diplomatic relations, has been nothing less than extraordinary. The establishment of a strategic partnership in 2017 was not a mere declaration of intent but an enumeration of the true and special character of the relations. Today, we are embarked on exploring newer vistas of cooperation.”

He said both India and Israel have a great potential to work jointly in the areas of high technology, innovation, water and energy.

The MEA official maintained that the two countries joined hands to develop rapid test kits and cooperated on vaccine research after the Covid-19 pandemic hit them.

Not only that, “the scope for high-tech collaboration between the two countries have grown in defence; under Make in India, and cooperation to combat cyber-crimes has become more important, as we face the threat of terrorists. In an era where technology dominates, India-Israel projects can lead the way, not only bilaterally but in securing new markets globally,” MEA Secretary Sanjay Bhattacharya said.

While stating that Israel is recognized as a start-up nation, he said India’s start-up initiative is building a conducive environment to bring together investors, entrepreneurs and innovators.

“The iCreate Centre in Gujarat and the $40 million joint I4F (India-Israel Industrial R&D and Technological Innovation Fund) are match-making mechanisms in this area; a lot more can be done,” the MEA official maintained.

With regard to water conservation in which Israel has been at the forefront of avant-grade research, he said, “This is a strategic sector for bilateral cooperation. Our efforts are aimed at leveraging your pioneering technology in water conservation and desalination to bring water to parched lands of Jamnagar, Chennai and Bundelkhand, to revive traditional indigenous water practices in the region and encourage new agricultural methods based on technology. The India-Israel Agricultural Project and the recent agriculture reforms and laws in India will play a key role in this endeavour.

As regarding bilateral engagement between India and the West Asian region, the MEA official said today, the trade volume with West Asia and Gulf region is $170 billion, thereby making it a major trading partner.

He said the trade basket has diversified over time, although hydrocarbons still account for the bulk of trade.

“The cumulative FDI inflow of $7 billion in the past two decades is 2 percent of our global FDI. But it surged in recent years with sovereign wealth funds and portfolio investments; moreover, Indian corporates are interested in investments in the region,” the MEA official maintained

“The region is vital for our energy security, accounting for 53 percent of India’s oil and 41percent of gas imports, besides stakes in oil blocks, refineries, strategic oil reserves,” he said.

“India sources 60 percent of fertilizers and raw material from this region, and has in turn positioned herself as a reliable source of food exports to the Gulf, making food security an element of this partnership,” he added.

“The presence of an Indian diaspora of over 9 million, who sent home around $48 billion in remittances, also makes the region important. Indian workers’ emerged as preferred migrants and there is recognition of their contribution to development of the Gulf States,” he further added.

But despite progress and development across the region, economic growth eluded many and religious radicalization and extremism played a role in the spread of violence and terrorism,” the official deplored, stating the growth of non-state actors, sometimes taking advantage of failed states and support from external agencies, complicated the scenario.

“There is a need for reforms to bring moderation in ideology; to revive tolerance and pluralism in society; and to build conditions for peace, development and stability for all,” he said.

“There is closer security coordination and collaboration, between states, to thwart the ambitions of the terrorists. India maintained a principled policy of non-interference and non-partisanship, advised peaceful negotiated settlement and maintained relations with all the countries,” he added.